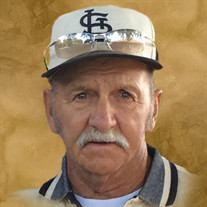 William “Bill” Ghys, age 80 of Morrisville, MO, passed away Sunday, March 15th in the comfort of his home. Bill was born in Los Angeles, California on November 16, 1939. He graduated from Rock Falls, Illinois and attended Central Bible College and Evangel in Springfield, MO. He was employed with Gospel Publishing House for 41 years and had a mowing business after his retirement for 20 years. He attended Morrisville Assembly of God and in his pastime was a HAM radio operator, taught archery, was a professional local fishing guide, had a great love for music and animals and an equal love for the St. Louis Cardinals and Green Bay Packers. Bill also loved to make people laugh and tease everyone with his famous quotes, “You’re healed”, “You’ve got it made”, and “I’m broke”. He is preceded in death by his eldest son, Bernie and his mother and father, Arthur and Evelyn. Bill is survived by the love of his life of 60 years, Eula and their children Shelly Hynes and husband Bill, Sandy Jeffries and husband Mark, Todd Ghys and wife Donnetta, twelve grandchildren, four great grandchildren, brother Art Ghys and wife Carolyn, sister Sonnet Roth and husband Jim, sister Becky Moore and husband Ron, and a host of friends and family, too numerous to mention. Services for Bill are being held privately under the care and direction of Butler Funeral Home and will be live streamed at: www.citylinktv.com/channels/bolivar-liberators/ Flowers can be sent to Butler Funeral Home. A memorial fund has also been set up to help offset funeral expenses with all donations made to Eula Ghys. http://paypal.me/billghysmemorialfund

William &#8220;Bill&#8221; Ghys, age 80 of Morrisville, MO, passed away Sunday, March 15th in the comfort of his home. Bill was born in Los Angeles, California on November 16, 1939. He graduated from Rock Falls, Illinois and attended Central... View Obituary & Service Information

The family of William Ghys created this Life Tributes page to make it easy to share your memories.

Send flowers to the Ghys family.