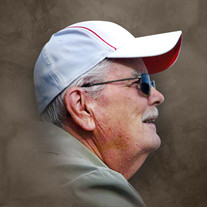 Bill started his life’s journey on April 25, 1939, he was born to Rev. Raymond Brooks and Mary Lee (Miller) Shook, in Belair, Missouri. When Bill was a toddler they moved to Aldrich, Missouri, to a home that was his grandmother, Jennie Beatley Coffman’s, home. He grew up in Aldrich and attended Aldrich School until it consolidated with Fair Play, where he graduated. He had three siblings, Betty Sue, Jenny Lue and Joseph Brooks. Bill was saved at a young age, knelt at the lap of his mother. When attending Fair Play schools, he met his future bride, Shirley Hutchins. They married July 4, 1959 at the bride’s home. They continued to live there for five years with Jesse (Chinkey) and Mae Hutchins. To this union two children were born: Paula Lynn and Darin Brooks. In the early 60’s Bill was Baptized into Fair Play Baptist Church. He loved his church and became very active. He was deacon and song leader for several years. He worked hard in his working years to support his family that he so dearly loved. He worked at Mono Manufacturing, Cranks Drug Store and REA Express. Lastly, he took a job at Paul Mueller Co. in Springfield, where he retired after 35 years. He spent some time as City Clerk for the city of Fair Play. All that knew him knew that he was a fun-loving guy who loved music. Southern Gospel singings were his passion. He would shout and praise the Lord. He loved having his family with him. He came down with diabetes and heart disease and had to endure several medical procedures. He was preceded in death by his parents Brooks and Mary Lee Shook; a sister Betty Bolton; and his father and mother in law, Chinkey and Mae Hutchins. Bill took flight to Heaven on Monday, November 11, 2019. He is survived by his wife, Shirley of the home, a daughter Paula Evans, and husband Bobby of Fair Play, a son Darin Shook and wife Christi of Goodson, Mo. Five grandchildren; Brandon Evans and wife Laurie of Bolivar, Justin Evans and wife Christina of Fair Play, Anna Evans of Fair Play, Caleb Shook and wife Kayla of Goodson, and Caylee Shook of Goodson. Five great grandchildren, Austin, Breanna and Caleb Evans, twin sisters Stella and Aurora Shook. A sister, Jenny Shook of Bolivar, a brother, Joe Shook of Mulvane, Kansas, and sister-in-law, Wanda Kirby of Weston, Mo. Visitation for Bill Shook will be held Friday, November 15, 2019 from 6:00 to 7:30 P.M. at the Butler Funeral Home in Bolivar, Missouri. Funeral Services will held be Saturday, November 16, 2019 at 2:00 P.M. at the Butler Funeral Home in Bolivar, Missouri. Burial will follow at Akard Cemetery in Fair Play, Missouri. Memorial contributions can be made in Bill's honor to the American Heart Association or the American Diabetes Association.

Bill started his life&#8217;s journey on April 25, 1939, he was born to Rev. Raymond Brooks and Mary Lee (Miller) Shook, in Belair, Missouri. When Bill was a toddler they moved to Aldrich, Missouri, to a home that was his grandmother, Jennie... View Obituary & Service Information

The family of William "Bill" Shook created this Life Tributes page to make it easy to share your memories.

Send flowers to the Shook family.