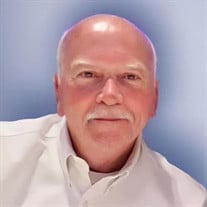 Wayne Allen Bridges, 77, of Nixa, MO, formerly of Overland Park, KS passed away on Monday, February 15, 2021 at home with his family by his side. He was born on April 21, 1943 in Halfway, MO to Melbie Ray Bridges and Zelma Marie Vincent Bridges. The family later moved to Kansas where he graduated from Turner High School. After graduating, he joined the US Army and then the Army Reserves. He married Deborah Lynn Bradford on August 27, 1977 in Overland Park, KS. Wayne was saved at Jericho Missionary Baptist Church in Independence, MO where he was a member until moving to Nixa, MO where he became a member of Southside Missionary Baptist Church in Bolivar, MO. Wayne loved to work in the yard and grow his own garden. Tomatoes were his specialty. He also enjoyed spending time with his family and friends. Wayne worked for Chrysler for over 25 years. He first worked for Bill Neal Chrysler/Plymouth, Dealers Claim Service and then went on to John Wallace Dodge and Steve Oliver’s Dodge, where he retired in 2005. He is survived by his wife of 43 years, Deborah Lynn Bridges, of the home. Three daughters, Lisa Bridges and wife, Sarah, of Novato, CA, Misty Spotts and Jason Lytle of Overland Park, KS, Stacie Swanson and husband, Kyle, of Derby, KS, one son, Ryan Bridges of Clever, MO. Six grandchildren, Khilea, Jake, Hadlie, Avery, Milo and Easton. One sister, Karen Cheatham and her husband, Bill, of Overland Park, KS, two brothers, Byron Bridges and wife, Linda, of Blue Springs, MO and Ken Bridges and wife, Karen, of Overland Park, KS as well as many nieces, nephews and wonderful friends. In lieu of flowers, memorial contributions may be made to Compassus Living Foundation or Southside Missionary Baptist Church. Graveside services will be held at Greenwood Cemetery on Friday, February 19, 2021, at 2:00 PM with Jackie Brakebill officiating. Friends may sign the guest book at the Butler Funeral Home Chapel, in Bolivar, Missouri.

Wayne Allen Bridges, 77, of Nixa, MO, formerly of Overland Park, KS passed away on Monday, February 15, 2021 at home with his family by his side. He was born on April 21, 1943 in Halfway, MO to Melbie Ray Bridges and Zelma Marie Vincent Bridges.... View Obituary & Service Information

The family of Wayne Bridges created this Life Tributes page to make it easy to share your memories.

Send flowers to the Bridges family.