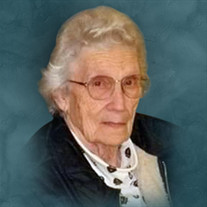 Virginia Marie Erven, 96, of Goodson, MO went to be with her Lord and Savior on August 9, 2019. Virginia was born January 11, 1923 in Parsons, KS to Harry and Lucinda White Provolt. On November 28, 1942, she married Jamie Orel Erven, who preceded her in death in 2002. Virginia met Orel while she was attending school at Emma D. High School in Goodson, MO. After graduation, her family moved for a short time to California. Upon returning, Orel proposed and they were married shortly after. For several years, Virginia worked at the garment factory and Teters in Bolivar. She also served as a 4-H community leader in Polk County for 35 years and enjoyed working with children in the community on their projects. Virginia was saved November 12, 1964 and joined Goodson Missionary Baptist Church. Later she moved her membership to Lindley Creek Missionary Baptist Church where she was an active member until her health no longer permitted. Her greatest desire was to see all of her family saved. Virginia was preceded in death by her husband, Orel; brother, Harry Provolt; sisters Sue Hambright and Dorothea McIntosh; her beloved daughter, Joyce Erven and cherished grandson, Caleb Erven. She is survived by her three children: Jamie Erven and wife Claudui of Bolivar, MO; Cherie Crain and husband Richard of Helena, MT; and son Kevin and wife Rebecca of Bowling Green, KY; two sisters-in-law: Willa Strader of Bolivar and Nelda Carter of Springfield. She is also survived by her grandchildren: Aaron Erven and wife Teresa, Karla Spear and husband John, Keith Bybee and wife Marci, Leeann Box and husband James, Adam Crain, Jeremy Crain, Joshua Erven and companion Angel, Rachel Erven, 12 great-grandchildren, three great-great-grandchildren, and a host of nieces, nephews and friends. The family would like to give a special thanks to the kind and loving staff at Citizens Memorial Health Care Facility, and especially Jennifer Stegner. Services for Virginia Erven will be held Tuesday, August 13, 2019 at 11:30 AM at the Butler Funeral Home in Bolivar, MO. Visitation will be held Monday, August 12, 2019 from 5-7 PM at the Butler Funeral Home in Bolivar, MO. Burial will take place at Mt. View Cemetery in Polk, MO. Memorial contributions can be made in Virginia’s honor to the Mt. View Cemetery in Polk, MO.

Virginia Marie Erven, 96, of Goodson, MO went to be with her Lord and Savior on August 9, 2019. Virginia was born January 11, 1923 in Parsons, KS to Harry and Lucinda White Provolt. On November 28, 1942, she married Jamie Orel Erven, who preceded... View Obituary & Service Information

The family of Virginia Erven created this Life Tributes page to make it easy to share your memories.

Send flowers to the Erven family.