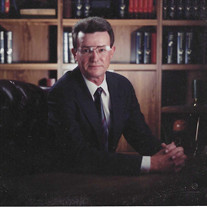 Virgil Dale Hughes, 81, was born on the family farm near Humansville, MO on August 11, 1938 to Otis Lyle Hughes and Lucy Jeanette (Womble) Hughes. He departed this earth on Sunday, January 12, 2020 at Lake Regional Hospital in Camdenton, MO. Virgil graduated from Humansville High School in 1956. After serving in the U.S. Army he started working at the Humansville Bank. He worked there for 31 years and was President and CEO for over 25 years. In 1992, he was employed at the Citizens Bank in Amsterdam, MO. In 2015, he was appointed President of the Bank of Macks Creek and served on their board of directors. Virgil was a member of the Amsterdam Masonic Lodge #141 and had served as the past master of both the Amsterdam and Humansville Masonic Lodge #144. Virgil is survived by his son, Jeffery Dale Hughes and fiancée Jessica Esteb of Osage Beach, MO, and since she was two years old, step-daughter Christina L. Hughes of San Pedro, CA. He is also survived by his grandson, Jackson Allen-Hughes, as well as brother Raymond Hughes and wife Doris of Bolivar, MO, sister-in-law Joyce Hughes of Humansville, Mo and sister in law Frieda Hughes of Sedalia, MO and several nieces, nephews and friends. He was preceded-in-death by his parents, brothers Darrel Lee and Donald Dean Hughes, and baby sister Addie Lavern Hughes. Visitation for Virgil Hughes will be held Friday, January 17, 2020 from 5-7 PM at the Butler Funeral Home in Humansville, MO. Graveside services will be held Saturday, January 18, 2020 at 11 AM at the Humansville Cemetery in Humansville, MO. In lieu of flowers, contributions can be made in Virgil’s honor to the Humansville High School Booster Club.

The family of Virgil Hughes created this Life Tributes page to make it easy to share your memories.

Virgil Dale Hughes, 81, was born on the family farm near Humansville,...