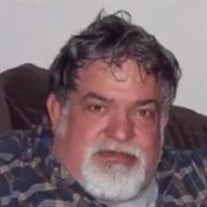 Virgil Black Jr. 57 of Bolivar, MO, passed away Sunday, November 14, 2021 at his home. Virgil was born on Friday April 03, 1964 in Humansville, MO to Virgil and Lupe Black. He attended Bolivar High School and graduated in 1982. He spent many years working on farms and doing odd jobs. There is probably not a farm in Polk County that he hasn’t mended fences, hauled hay, or built barns on. Later, Virgil spent 15 years working at Home Court Advantage taking care of at-risk youth. In 2000, Virgil was blessed with his son Cody, who was the light of his life. Cody had a love for planes and trains growing up, so they would spend countless hours at the airport and train tracks waiting for the planes to take off and for the trains to go by. Their funniest memories together include road trips they would take to St. Louis and Kansas City in which by the end of the trip, Virgil's vehicle was either being towed away or needing new parts. Another one is a time they were coming home from Arkansas and Cody told Virgil to go straight and he would end up in Missouri but after falling asleep, Cody woke up the next morning to Virgil pulling into a gas station in Tulsa, OK. Virgil was one of the hardest workers you would ever meet and would help anyone in need. He couldn’t go anywhere without running into someone he knew and he never met a stranger. You could always catch him blaring Kid Rock and ACDC when he heard them on the radio. Virgil is survived by his son Cody, of Springfield; One brother, Irland and two sisters, Linda and Cindy, of Bolivar; a nephew, Curtis and niece, Chelsea of Bolivar He is preceded in death by his parents; and one sister, Grace. Services for Virgil will be held 2:00 PM Thursday, November 18, 2021 at the Butler Funeral Home of Bolivar, MO. Visitation will be one hour prior to services from 1-2 pm at the Funeral Home. Burial will take place in the Mt. Gilead Cemetery south of Bolivar. Memorial contributions may be made to the American Heart Association.

Virgil Black Jr. 57 of Bolivar, MO, passed away Sunday, November 14, 2021 at his home. Virgil was born on Friday April 03, 1964 in Humansville, MO to Virgil and Lupe Black. He attended Bolivar High School and graduated in 1982. He spent many... View Obituary & Service Information

The family of Virgil Black Jr. created this Life Tributes page to make it easy to share your memories.

Send flowers to the Black family.