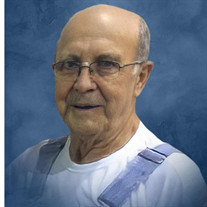 Vincent Wingfield Hughes was born on his grandparent’s farm located Northwest of Weableau, Missouri on August 23, 1936, to Cecil and Tula Wingfield Hughes. He passed away at his home on June 3, 2021. Vince, the 2nd of 4 children spent most of his childhood on the farm on the Wheatland prairie. He graduated from Weableau High School in 1954. After graduation, he joined the United States Air Force and completed hospital corps training at Great Lakes Naval Air Base in November 1955. He served his country as a Medic in Spain and North Africa, receiving an honorable discharge in March of 1963. On November 28, 1959, he married the love of his life, Betty Lou Rains. Their son Randy was born 10 months later, and daughter Ronda 2 years after that. Vince was saved and baptized at a revival at Humansville First Baptist Church in 1970. He proclaimed his assurance of that hope not long before his passing. Vince worked for General Motors in Kansas City for several years before purchasing Alva Rains Service Station from his father in-law. He also built pole barns for a time with Walter Scott. Vince then spent many years working for Empire Gas Company as a delivery and service man. This was his last full-time employment before retiring, and he loved his coworkers there, telling lots of stories about them. Vince began driving a school bus for Humansville Schools after retirement. If you asked him what his favorite job he ever had was, this one might not have been his favorite, but it probably pulled at his heart strings the most. He had a lot of great stories about the kids he hauled on the bus, and we are sure he made an impression on them too…….one way or another. Vince and Betty enjoyed taking their 5th wheel to Bluegrass festivals and visiting their kids and grandkids. Always and avid coon hunter, he also hunted a lot of quail, and caught a lot of fish. He loved to tell stories, and man he had a lot of them. As a child on the farm, getting into trouble with his brother Dennis and cousin Clayton, aggravating his sisters Betty and Donna along with his cousin Thelma along with stories about his co workers and coffee shop buddies. He also loved to tell stories about his grandkids who he teased hard but loved harder. He always stepped up for all of us. His stories, laugh and orneriness brought life and fun to every birthday and family celebration. Vince is preceded in death by his father Cecil and mother Tula, his brother Dennis Hughes and sister Betty Pearson. He is also preceded in death by his father and mother in-law Alva and Alpha Rains, brother and sister in-law Ralph and Lucille Piper, brother in-laws John Roy Rains, Paul Jay Rains, Dale Rains, Irvin Rains and Buddy Rains. He leaves behind his wife Betty of their home of 50 years, his son Randy of Azle, Texas, daughter Ronda Hardt and husband Doug Purma of Bolivar, Missouri. His sister Donna Dempsey; granddaughter Kristen Johnson and husband Matt; grandsons Darren Hardt, James Hughes, Vincent Joseph (Joey) Hughes and wife Samantha, Christian Hughes and his Fiancé Cynthia; great grandchildren Gage Johnson, Jett Johnson, Dallas Hardt, Sophie Johnson, May Hardt, Owen Hughes and Oliver Hughes; Brother in-law Billy Pearson and his sister in-law Betty Hughes; sister and brother in-law Kathy and Keith Reser; sister in-laws Evelyn Keller, Joyce Rains, Margaret Rains and Cindy Rains along with many nephews and nieces who he loved, and loved to tease. Graveside services for Vince will be held at the Humansville Cemetery on Monday, June 7, 2021 at 11:00 A.M. Memorial Contributions may be made to the Disabled American Veterans Association, the Wounded Warrior Project, or to the Shriners Hospital for Children.

Vincent Wingfield Hughes was born on his grandparent&#8217;s farm located Northwest of Weableau, Missouri on August 23, 1936, to Cecil and Tula Wingfield Hughes. He passed away at his home on June 3, 2021. Vince, the 2nd of 4 children spent... View Obituary & Service Information

The family of Vincent Wingfield Hughes created this Life Tributes page to make it easy to share your memories.

Vincent Wingfield Hughes was born on his grandparent’s farm located...