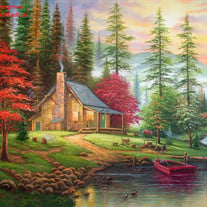 Verlyn Cecil Hazlett, 87, of Bolivar passed away on Saturday, January 4, 2020. He was born on July 21, 1932, in Fayetteville, Arkansas, to Victor and Nellie (Eaton) Hazlett. Verlyn left home at the age of 16 to make his own way. Following a short stint in the army, he worked at various jobs, ending up in Larned, Kansas. There, he settled down and raised a family of five children. Following a divorce, he relocated to Lee’s Summit. He joined his brother Phil at AT&T where he was a journeyman, specializing in the painting trade. While there, he met his future wife, Lola. They married on May 27, 1977. Both retired and settled on a working farm in Preston, Missouri, raising cattle and horses. As a self-made, hard-working man and jack of all trades, Verlyn was proud of the life he created. His hobbies included restoring automobiles, including a Ford Model A, attending auctions/estate sales/flea markets, collecting a wide variety of items; professional restoration/painting of tractors and trailers; and dabbling with cars. He was an avid reader, especially of Westerns, and amassed a large collection of movies and books. He is survived by his wife, Lola; two sons, Steven of Lee’s Summit and Mark (Betty) of Great Bend, KS; three daughters, Debra (Bob) of Larned, KS, Julie of Great Bend, KS, and Lori (Bruce) of Peculiar, MO, two stepsons, Charlie of Kansas City, MO, and Ted McNeely of Belton, MO; one brother Phillip of Branson; one sister, Donna Duncan of Las Vegas, NV; and many grandchildren and great-grandchildren. Preceding in death were his parents, two brothers, Roger and Warren; and one sister, Phyllis. Cremation rites have been accorded and a private graveside will be held at Fairview Cemetery in Joplin.

Verlyn Cecil Hazlett, 87, of Bolivar passed away on Saturday, January 4, 2020. He was born on July 21, 1932, in Fayetteville, Arkansas, to Victor and Nellie (Eaton) Hazlett. Verlyn left home at the age of 16 to make his own way. Following... View Obituary & Service Information

The family of Verlyn Cecil Hazlett created this Life Tributes page to make it easy to share your memories.

Verlyn Cecil Hazlett, 87, of Bolivar passed away on Saturday,...

Send flowers to the Hazlett family.