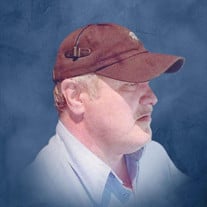 Thomas Harold Benning, 52, of Aurora, MO passed away Saturday, May 2, 2020 in Brighton, MO. Tommy was born October 16, 1967 in Kansas City, MO to Glen and Darlene Cecil Benning. He was raised as a young man in Kansas City until the family relocated in his teenage years to Bolivar. In Polk County, Tommy enjoyed working around the farm, and the farm life. As a teenager he enjoyed cruising around the square and hanging with his friends! During this time he met his lovely wife, Pamela. The two married and moved back to the Kansas City area, where Tommy worked as a contract laborer. The call of Polk county was strong on Tommy and Pamela, and they moved back to Polk. Tommy suffered a serious head injury, and was disabled for a period of time. After a time of struggling he decided he did not want to stay down or disabled! So after a period of recovering, he jumped into a new career job. Jumping into the cab of a big truck made him feel great. Trucking was Tommy’s dream job, and he considered himself blessed to be able to drive for as many years as he was able, and to provide for His family! Tommy had a sense of faith. He was raised attending The Church of God of Prophecy, he enjoyed sharing about faith and having conversations about the Bible. Tommy also loved spending time outdoors, and could often be found fishing off a bank or hunting a deer in the woods! Tommy was a friend to many, and will be dearly missed. Tommy is survived by his loving wife of 35 years, Pamela. Also his three children: Tommy Lee Benning and his wife Amanda, Automn Benning, and Summer Benning. He is also survived by his grandchildren who know him as PaPa. He really loved and enjoyed his time with Rylee Benning and Coulson Benning, as well as a number of sibling, nieces, nephews, and a host of friends. A private service for Tommy Benning will be held by the family. Arrangements for Thomas are under the care and direction of Butler Funeral Home.

Thomas Harold Benning, 52, of Aurora, MO passed away Saturday, May 2, 2020 in Brighton, MO. Tommy was born October 16, 1967 in Kansas City, MO to Glen and Darlene Cecil Benning. He was raised as a young man in Kansas City until the family relocated... View Obituary & Service Information

The family of Thomas Benning created this Life Tributes page to make it easy to share your memories.

Send flowers to the Benning family.