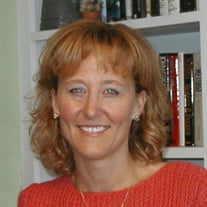 Susan Elaine Roweton, 54, Bolivar, passed away Sunday, November 3, 2019, at her rural Bolivar home shared with her husband of 31 years, Kelly Roweton. The mother of two daughters and a son (Kaitlin, Becca and Sam) amazed countless friends and family members with her dignity and courage in fighting cancer for many years. She maintained a remarkable list of interests and an extensive collection of friendships throughout life. She was born October 16, 1965, in Joplin to Judy and Bob Casanova and was a 1984 graduate of Webster Groves High School and 1988 graduate of the University of Missouriwith a Bachelor of Journalism degree. She was a member of the Kappa Alpha Theta sorority. She met Kelly while both were at the University of Missouri and they married September 10, 1988. They moved to Kelly’s hometown of Bolivar that same year, where she went to work as an advertising representative for the Bolivar Herald-Free Press. She held the title of advertising manager for most of her 10 years there, building lasting relationships with co-workers and clients. After becoming a mother, her career evolved into substitute teaching at Bolivar R-1 School District, managing the concession stands for the Bolivar Booster Club, and serving as a social media specialist for The Marketing Bunch. She also volunteered within a variety of organizations, including in classrooms, as a yearbook curator, for Friends of the Library, Bolivar Booster Club, Girl Scouts, Vacation Bible School, and Sunday School at Bolivar First Baptist Church, where she was a member since September 17, 2000. She demonstrated remarkable talent and patience in memorizing trivia, quotes, and lists of presidents, vice-presidents, first ladies, state capitals, Academy Award best picture recipients and more. Her other interests included, motherhood, photography, scrapbooking, music and musical performance, game nights, traveling, running, and biking. Friends remember her for her contagious happiness, as demonstrated by her ever-present smile and the smiles reflected from others. Survivors include her husband Kelly Roweton, of the home; daughter and son-in-law Kaitlin and Aaron Kunnemann, St. Louis; daughter Becca Roweton, Dallas, TX; son Sam Roweton, Columbia; parents Bob and Judy Casanova, St. Louis; mother-in-law Rose Roweton, Bolivar; sister and brother-in-law Stephanie and Steve Cohen, Dallas, TX; sister Sarah Kowalski, Denver, CO; sister/brother-in-law Vicki and Bruce Morgan, Branson; brother/sister-in-law Kendal and Terry Roweton, Beverly Hills, FL; sister/brother-in-law Denni and Steve McColm, Dunnegan; sister/brother-in-law Marla and Wes Kemp, Bolivar; and 18 nieces and nephews. In lieu of flowers, memorial gifts can be made to Friends of the Library Polk County. Join us in celebrating Sue’s life with a visitation at the Polk County Library Saturday, November 9 from 2-4 p.m.

The family of Susan Elaine Roweton created this Life Tributes page to make it easy to share your memories.

Send flowers to the Roweton family.