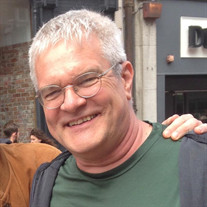 Stephen Walter Trobisch, 59, of Bolivar passed away on Friday, August 23, 2019, at Mercy Hospital in Springfield. Stephen was born on January 25, 1960, to Lutheran missionary parents Walter and Ingrid Trobisch in Cameroon, Africa. He grew up and went to school in Austria. His first degree was in mechanical engineering, but his love was for the arts. He received a Ph.D. from the University of Vienna in Theater Studies, worked as an actor in Vienna, London, Germany, and Los Angeles. He finally made his home in Missouri and taught at Drury University and Missouri State University in Springfield. He was the managing director and co-owner of two publishing businesses in Bolivar, and in this capacity edited more than 200 book manuscripts for publication. He also had a thriving translation business, translating technical, legal, and scholarly texts from German into English. Stephen found much joy as a professor and earned several awards for his teaching. He proudly walked the 500 miles of the El Camino in Spain, traveled to Kenya, Tanzania, and Israel. Last year he fulfilled his dream of visiting Dublin and following the footsteps of James Joyce and Molly Bloom. He was a gifted piano player for whom sheet music was optional, loved to sing opera while driving, a life-long motorcycle enthusiast, and gifted carpenter. Nothing was more important to him, however, than spending time with family and friends. Stephen is survived by his wife Kim, sons Neil, Sam and Kai, and granddaughter Skylar Henenberg, all of Bolivar; two brothers, David Trobisch (Vera, Simon) of Germany and Daniel (Gisela) of Austria; two sisters, Katrine (David) Stewart of Albuquerque, NM, and Ruth (Ernst) Weissensteiner of Austria, as well as many dear cousins, aunts, nieces, nephews, and the members of his beloved German Club. A celebration of Stephen’s life is to be held in January to commemorate his 60th birthday. In honor of his love for the arts, memorial contributions may be made to KSMU, 901 S. National, Springfield, MO 65897.

The family of Stephen Trobisch created this Life Tributes page to make it easy to share your memories.

Stephen Walter Trobisch, 59, of Bolivar passed away on Friday,...

Send flowers to the Trobisch family.