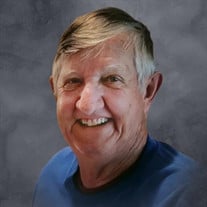 Robert “Stanley” Nelson, 75, passed away on December 30, 2021, while working on the farm, enjoying the day. He was the husband of Carolyn Sue Nelson; they were wed in holy matrimony on June 15, 1968. Stanley was born in Dixon, MO., on May 9, 1946, to Robert Edward and Bernice Nelson. He graduated from Dixon High School in 1964 and joined the United States Army shortly after. During his service, he was a Vietnam Veteran and spent most of his time stationed in the Far East. He obtained the rank of Sergeant before ending his time in service with the Army. He was employed at Alltel (Windstream) as Head of Construction and retired after 38 years of service. He was a member of Lion’s Club, Veterans of Foreign Wars, and American Legion. He enjoyed spending time with family and especially his grand and great-grandchildren. Stanley will be remembered for his loyalty, humble self, serving, caring, and strength. His beloved Carolyn, children, grand, and great-grandchildren were his life’s joy; he loved being Pap-Pa. A Pap-Pa like you is rare, one that’s so generous, smart, and kind. A Pap-Pa like you is what everyone needs, full of smiles and laughter, always doing great deeds. Nothing can replace a father and Pap-Pa like you, but when you get to heaven, God will be lucky to have you too. He is preceded in death by his father, Robert Edward Nelson, mother, Bernice Nelson, and brother, Thomas “Tommy” Nelson. Stanley is survived by his spouse Carolyn of the home, three children - Brian and LeAnne Nelson, Scott and Janell Nelson, and Jolene and Justin Warren, seven grandchildren – Mattracea and Colton Wendleton, Jordan and Katie Nelson, Kali and Sam Wellman, Katelynn and Ethan Lockhart, Logan Warren, Korey Nelson, and Jenna Nelson, and five great-grandchildren, Emmett Wendleton, Kinsley and Harper Lockhart, Lilah Nelson, and Owen Wendleton, one sister Lois Carroll, one sister-in-law Susie Nelson, and many nephews and nieces. Arrangements are under the care and direction of Butler Funeral Home of Bolivar.

The family of Stanley Nelson created this Life Tributes page to make it easy to share your memories.

Send flowers to the Nelson family.