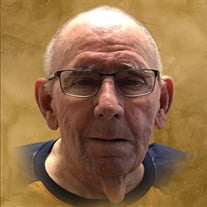 Sonnie (Bob) Lee, 85 of Bolivar formerly of Pleasant Hope, Missouri passed away on October 23,2019. Bob was born November 8, 1933 to Valda and Stella (Kirby) Lee in Millcreek, Oklahoma. He was united in marriage to Jimmie Redd on July 3, 1955 in Gainesville, Texas. Bob was preceded in death by his parents; wife; a son, Robert Wayne; a brother, James, and daughter-in-law, Vanessa Lee. He is survived by 5 children: Cliff of Oklahoma City, Oklahoma; Jerry, of Pleasant Hope; Gary of Fair Grove; Karen of Brighton; and Rodney (Kay) of Pleasant Hope; 5 grandchildren: Jennifer (Eric) Ridinger; Travis (Jamie) Lee; Stephanie Lee all of Fair Grove, Josh (Kari) Lee of Springfield and Jaydin Lee of Pleasant Hope; and 3 great grandchildren: Connor, Aiden and Charli Ridinger; 3 brothers: Harold (Connie) Lee; Gene Lee; Donald (Shirley) Lee all of Ardmore, Oklahoma; and 3 sisters: Hazel Gammon of Hilton, Oklahoma; Patsy (Charles) Payne of Ardmore, Oklahoma; and Helen Lee of Madill, Oklahoma; and a very special family friend, Julia Valdes. Bob is also survived by two loyal furry companions, Poncho and Lola; along with several nieces, nephews and friends. Bob spent most of his life driving a truck with Campbell 66 out of Wichita Falls, Texas and Springfield, Missouri. He later retired from Yellow Freight out of Baxter Springs, Kansas. After a brief retirement, he decided to go back to work at Ye Ol' Buggy Bath in Springfield and then was employed by the Pleasant Hope School District as a custodian where he got to spend a lot of time with his grandchildren. Bob's passions included fishing and planting his garden. He also enjoyed spending countless hours with his grandchildren. He was a member of the Pleasant Hope United Methodist Church where he served his personal Savior, Jesus Christ. The family would like to express their love and gratitude to the entire staff of CMHCF for becoming more than just care givers, but more like loving family and to CMH Hospice for their love and support. In lieu of flowers, a donation can be made to CMHCF Resident Special Project Fund in memory of Bob. Donations can be collected at Butler Funeral Home or mailed to CMHCF at 1218 West Locust, Bolivar, Missouri 65613. Visitation for Bob will be Friday, October 25, 2019 from 6 to 8 P.M. at Butler Funeral Home, Bolivar, Missouri. Funeral Services will be Saturday, October 26, 2019 at 11:00 A.M. at Butler Funeral Home, Bolivar, Missouri, with burial to follow at Pleasant Hope Cemetery, Pleasant Hope, Missouri.

Sonnie (Bob) Lee, 85 of Bolivar formerly of Pleasant Hope, Missouri passed away on October 23,2019. Bob was born November 8, 1933 to Valda and Stella (Kirby) Lee in Millcreek, Oklahoma. He was united in marriage to Jimmie Redd on July 3, 1955... View Obituary & Service Information

The family of Sonnie Bob Lee created this Life Tributes page to make it easy to share your memories.

Send flowers to the Lee family.