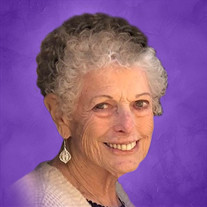 Shirley Ann Henry, 77, of Bolivar, MO passed away Saturday, November 30, 2019 at Citizens Memorial Healthcare Facility in Bolivar, MO. Shirley was born on April 8, 1942 in San Antonio, TX; the daughter of Orville and Sylvia (Akers) Mason. She was united in marriage to Patrick Henry on June 30, 1961 in San Antonio. He survives. Also surviving is: one son, Michael (Jeanne) Henry of Riverview, FL; three grandchildren, Sienna Henry, Patrick Henry III, and Samantha Henry; one great-grandson, Patrick Henry IV; one great-granddaughter, Addison Henry; two brothers, Robert Mason of San Antonio and Kenneth Mason of Albuquerque, NM; one sister, Mabel Jean Mayes of Springfield; and one former daughter-in-law, Patricia Shoup. She was preceded in death by her parents and one son, Patrick Henry, Jr. Shirley was a proud Air Force Wife – dutifully managing her home during Patrick’s three tours in Vietnam. This, as well as his later job in Civil Service, lead Shirley to the island of Crete, Greece and later Madrid, Spain. While in Madrid, she worked for the Red Cross. Shirley also worked as a Child Care Development Supervisor at Luke Air Force Base in Arizona and later Vandenberg Air Force Base in California. While living in Washington, Shirley was part of Community Oriented Policing Services, and in Denver, CO she became a Neighborhood Problem Solving Facilitator. More recently, Shirley volunteered at the Citizens Memorial Hospital Info Desk, helping patients and their family members. She also enjoyed being a member of the Red Hat Society. A funeral will be held for Shirley at 5:00 P.M. on Thursday evening, December 5, 2019 at Heritage Baptist Church in Bolivar. Friends and relatives are invited to a Visitation with the family one hour prior to the service at the church from 4:00-5:00 P.M. Cremation rites will be accorded following services. Memorials in honor of Shirley's life may be made to St. Jude Children's Research Hospital.

The family of Shirley Henry created this Life Tributes page to make it easy to share your memories.

Send flowers to the Henry family.