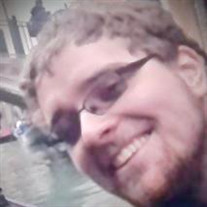 Samuel Walter Trobisch, 26, of Bolivar passed away on Monday, March 1, 2021, at his home surrounded by family. Sam was born on October 27, 1994 to Stephen and Kim Trobisch in Springfield, MO. He grew up and went to school in Bolivar. After high school, Sam studied at Missouri State University and graduated with a Computer Information Systems degree. At a job fair, Sam discovered his next aspiration: to pursue a career as an IT Specialist for Phillips 66 in Bartlesville, Oklahoma. Sam began his career path in 2017 as an intern for Duck Creek Technologies in Bolivar and designed book covers for Quiet Waters Publications. In 2018 Sam held his first interviews with Phillips 66 where he was immediately taken in by the company and unexpectedly found a new family in his coworkers. Sam was often appreciated as an employee for his friendliness and professionalism and for often completing the most orders in his office. Bartlesville quickly became his second home as he grew an everlasting bond to his cherished “Oklahomies” in Tulsa. Sam enjoyed many hobbies that included video games, eating out, late nights at the hookah bar, swimming, sweaty Blue Moons, and his beloved Crown Victoria. Inspired by his father, Sam also developed a passion for critiquing movies, learning about cars, and watching Formula One. However, it was most important to Sam that he had friends and family to share these joys with. His friends admired Sam’s relaxed and unbothered attitude towards life. When asked how he was doing, he would often say, “Just vibin’.” One friend remembers Sam as laid back in a floaty with a drink in his hand soaking it all in. Sam was drawn to water, and it did not matter, whether it be a pool, a lake, the ocean, or a bathtub. He was preceded in death by his father Stephen and grandmothers Linda Gilchrist and Ingrid Trobisch. Sam is survived by his mother Kim; brothers Neil and Kai, grandparents Dennis and Cindy Hood, all of Bolivar; uncles Bruce (Tonna) Hood of Bolivar, David (Vera)Trobisch of Germany, Daniel (Gisela)Trobisch of Austria, aunts Ruth (Ernst) Weissensteiner of Austria and Katrine (David) Stewart of New Mexico; niece Skylar Henenberg; numerous friends and cousins, and Sam’s KU oncology team - especially his devoted and caring APRN Anne Stanton. An informal ceremony for Sam’s friends and family will take place on Saturday, March 20 at 2pm at the columbarium in Greenwood Cemetery. A celebration of life is to be held at a later date. In lieu of flowers, memorial contributions may be made to the Osteosarcoma nonprofit MIB Agents, P.O. Box 858, Barnard, VT 05031 [email protected]

Samuel Walter Trobisch, 26, of Bolivar passed away on Monday, March 1, 2021, at his home surrounded by family. Sam was born on October 27, 1994 to Stephen and Kim Trobisch in Springfield, MO. He grew up and went to school in Bolivar. After high... View Obituary & Service Information

The family of Samuel Walter Trobisch created this Life Tributes page to make it easy to share your memories.

Samuel Walter Trobisch, 26, of Bolivar passed away on Monday,...

Send flowers to the Trobisch family.