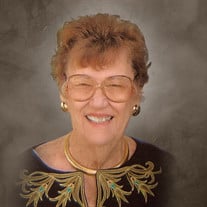 Ruth Lillian Robinson, 95, of Bolivar, MO passed away Wednesday, December 25, 2019 at her home in Bolivar, MO. Ruth was born on May 3, 1924 in Alton, MO to George and Velma Rhoades Harper. On April 13, 1947 she was joined in marriage to Gordon Robinson. The two were married for 54 years, and to this union three children were born. Ruth lived life in full motion. As a mother, she involved herself in her kids many activities, including acting as den mother for the Boy Scouts. She also involved her children in pursuits that she found worthwhile, including the beginning of the American Field Service Program in Bolivar. Ruth worked diligently toward bringing foreign exchange students in and showing them what America looked like. Her interest in other cultures was a love that she passed on to her children. Ruth was overall a very caring wife, mother, and friend. She kept in touch with many people over long period of time and great distances. If Ruth cared about you, she let you know it. Ruth was also an avid reader. She enjoyed books, but especially loved magazines. Ruth was also very devoted in her faith and was one of the longest serving members of the Bolivar United Methodist Church. Her love and compassion will be dearly missed by those who were blessed to know her. Ruth is preceded in death by her husband, Gordon Robinson. Ruth is survived by her children: Keith Robinson, Gary Robinson and wife Margaret, and Dale Robinson and wife Debbie; as well as her grandchildren: Warren Robinson, Spencer Robinson, and Lizeth Robinson. Ruth is also survived by her great-grandchildren: Thomas Robinson, Charlotte Robinson, and expected in March, Wyatt Robinson. Funeral Services for Ruth Robinson will be held Saturday, December 28, 2019 at 2 PM at the Butler Funeral Home in Bolivar, MO. Visitation will be held the hour prior. Burial will be held privately by the family under the direction of the Butler Funeral Home.

Ruth Lillian Robinson, 95, of Bolivar, MO passed away Wednesday, December 25, 2019 at her home in Bolivar, MO. Ruth was born on May 3, 1924 in Alton, MO to George and Velma Rhoades Harper. On April 13, 1947 she was joined in marriage to Gordon... View Obituary & Service Information

The family of Ruth Lillian Robinson created this Life Tributes page to make it easy to share your memories.

Send flowers to the Robinson family.