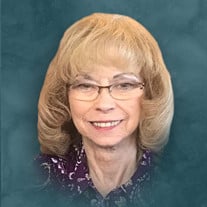 Mary Ruth Miller Eckinger, born July 5, 1942, to Tommy and Meda Miller in Bolivar, Missouri. Ruth gained the victory over cancer on October 7, 2019, and went home to be with her Savior. She grew up and attended school in Bolivar, graduating high school in 1960. She spent many hours at her father’s store, Northside Market. She was saved as a young woman. She married Richard Cleaver on December 20, 1968, and was the wonderful mother to her two children, Greg and Rhonda. Her children were truly the loves of her life. When Richard passed, she married her sweetheart, Duane Eckinger on March 7, 2001. Along with this new marriage came Duane’s two daughters and a son. Ruth loved them as her own. Ruth and Duane spent the last several years ministering to the wonderful residents at Parkview Nursing Home, Butterfield Assisted Living, and CMHCF Nursing Home. Ruth loved being outdoors and you would see her speed walking throughout her neighborhood and community. Her last church membership was Berean Batpist, Springfield, and she attended Heritage Baptist Church in Bolivar. She built many friendships with neighbors and the community with her compassionate nature. Many of these friends attended to her in her last weeks. They were truly blessings to Ruth and her family. She was preceded in death by her Mother, Meda Miller, father, Tommy Miller, brother Charles Miller, sister Joyce Staker, and first husband Richard Cleaver. She is survived by her husband, Duane, children Greg (Tresa) Cleaver, Rhonda (Terry) Butcher, Denise (Kody) Crawford, Duane (Bambi) Eckinger, Dawn (PJ) Sribuarat, sister Delores (Roy) McElwee, brother-in-law Ron Staker, brother-in-law and sister-in-law Wally and Marilyn Illsley, 14 grandchildren, and 7 great grandchildren. Visitation for Ruth Eckinger will be held Thursday, October 10, 2019 from 10:00-10:45 AM at the Butler funeral Home in Bolivar, MO. A graveside service will be held at 11 AM on Thursday, October 10, 2019 at the Mt. Gilead Cemetery in Bolivar, MO.

Mary Ruth Miller Eckinger, born July 5, 1942, to Tommy and Meda Miller in Bolivar, Missouri. Ruth gained the victory over cancer on October 7, 2019, and went home to be with her Savior. She grew up and attended school in Bolivar, graduating... View Obituary & Service Information

The family of Ruth Eckinger created this Life Tributes page to make it easy to share your memories.

Send flowers to the Eckinger family.