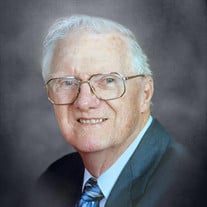 Robert Lee Callahan, “Bob,” was welcomed into his eternal home by his Lord and Savior, Jesus Christ, on October 3, 2020 at the VA Home in Mt Vernon, Missouri. A gentle, kind man who loved and trusted God, Bob always believed the best in people and served his family, friends and even strangers humbly, generously and graciously. Robert, the oldest of three children, was born on March 19, 1932 in Bismark, MO, the son of Elmer Lee and Mamie Callahan. He is survived by his two children: son, Robert P. Callahan and wife Donna; daughter, Brenda and husband Dennis Owens; grandchildren Heather Stonestreet, and husband Michael; Esther Munch and husband Aaron; Lance Callahan and wife Hillary; and Zachary Owens and wife Amanda. He was blessed with five great grandchildren: Katherine Stonestreet, Sophia Owens, Frances Munch, Max Owens and Sadie Callahan. He is also survived by his sister, Nancy (Callahan) Peal, sister-in-law, Ellie (Reid) Winters and her husband Cecil Winters. Numerous nieces and nephews whom he loved also survive him. Bob lived his formative years in Poplar Bluff, MO, and graduated high school from Poplar Bluff in 1950. It was in high school that he met the love of his life, Gerry (Reid) Callahan, his “Beautiful Blue Eyed Girl” as he always referred to her. They married on September 8, 1951 and began a priceless love story of 66 years that their family cherishes. This legacy includes the unconditional love demonstrated this past decade in his tender, tireless caregiving as Gerry faded from him with her Alzheimer’s battle. Also predeceased are his parents and stepmother, Irene (Robinson) Callahan, brother, Kenneth Callahan, one sister-in-law, and two brother-in-laws. Bob served his country proudly with an Army career of 30 years. He is an honored veteran of the Korean War and Vietnam War. He valiantly served our country as a combat member of the 101st Airborne Screaming Eagles in Vietnam. Among numerous military decorations and medals, he was awarded the Bronze Star Medal for his heroic service and meritorious achievement in a combat zone. Prior to his military career, he managed theaters in Cairo, IL. He enjoyed sharing accounts of how he and Gerry worked in theaters together as young high school sweethearts. Following his military career and future work with Pratt & Whitney Aircraft Engines in Columbus, GA. Bob and Gerry moved to Bolivar, MO. It was in Bolivar that Bob continued to work, joyously supporting Dennis in the operation of Simon B’s Eatery and serving as Plant Supervisor at First Baptist Church. Bob enjoyed fishing and model train layouts but his love was serving his God, his family and country. This love was reflected in his retirement lifestyle of daily Bible study, listening to gospel music, and volunteer service at church. His love for family gatherings gave him much joy, especially the laughter around the dinner table and giggles of his grandbabies. He was loved and respected by all who knew him. A celebration of life will be held 11:30 AM Friday, October 9, 2020 under the direction of Dennis Owens, at the High Street Church, 900 North Eastgate Ave, Springfield, MO 65802. Visitation will be held one hour prior to services from 10:30 AM to 11:30 AM at the Church. Bob will be placed to rest prior to his celebration of life in a private family service at the Missouri Veterans Cemetery in Springfield, MO. where Rob Callahan, Dennis Owens, Zach Owens, Lance Callahan, Aaron Munch and Frosty Ross will act as pallbearers. Memorial contributions may be made to the High Street Church Mission Project.

Robert Lee Callahan, &#8220;Bob,&#8221; was welcomed into his eternal home by his Lord and Savior, Jesus Christ, on October 3, 2020 at the VA Home in Mt Vernon, Missouri. A gentle, kind man who loved and trusted God, Bob always believed the... View Obituary & Service Information

The family of Robert Lee Callahan created this Life Tributes page to make it easy to share your memories.

Robert Lee Callahan, “Bob,” was welcomed into his eternal home...

Send flowers to the Callahan family.