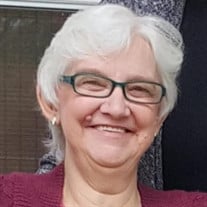 Rita Faye (Ballinger) Clay was born March 5, 1959 in Kansas City, MO to Lee and Charlene Ballinger. Rita died December 10, 2020 after a courageous battle with colon cancer. Rita graduated from Bolivar High School in 1977. She was the true definition of what it means to be a Liberator for Life. She enjoyed watching her kids and grandkids be Liberators, and you could find her every year on the Class of ’77 float in the homecoming parade. Married at a young age Rita welcomed her first and only son Robert before graduating from high school. Daughter, Stephanie followed a few years later. On April 9,1989, Rita married Donnie Clay and from this union daughter Misty was born. Rita was a huge football fan; you could catch her at every Friday night home game cheering on her favorite Liberators. Sundays meant watching football all day, with the day highlighted her beloved Chiefs. She was also a Tom Brady superfan and considers it a highlight of her life that she was able to see Tom Brady play the Chiefs at Arrowhead Stadium and wanted it to be known that he is just as pretty in real life as he is on TV. Rita loved her family. She loved being a mom, a sister, and a wife, but being a grandma, or a Maga, as her 6 grandchildren called her was her greatest blessing. Rita was preceded in death by her parents, Lee and Charlene Ballinger, and in-laws Bill and Goldie Clay. Rita is survived by husband, Donnie; children Robert Coleman and wife Angie, Stephanie Bradshaw and husband James, Misty Werner and husband Allen; grandchildren Amberlee, Evan, and Hannah Coleman, Alexis, Olivia, and Autumn Bradshaw, and grand dogs Clark and Ferrara, all of Bolivar. Brother Jerry Ballinger, and sister Shirley Taylor, of Bolivar, many nieces, nephews, and a multitude of other family members, and special lifelong friends Tami Ealy, Kathy Duke, and Zelda Meadors. Rita was saved in her early 20s and her family takes comfort in knowing she is in the presence of the Lord.

The family of Rita Clay created this Life Tributes page to make it easy to share your memories.

Send flowers to the Clay family.