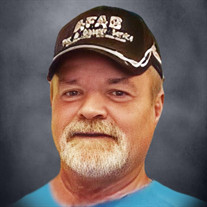 Richard Gary Mendiola, 66, of Humansville, MO passed away Friday, January 21, 2022 surrounded by his family and friends. Rick was born May 1,1955 in Atlanta, GA to Clara Goza and Rudolph Mendiola where he lived until he was 2. Rick grew up in California where he was raised by his mother and stepfather Kenneth Larson. After high school Rick joined the Army. He was stationed in Texas and Alaska. He met his first wife Debbie Souza and had two children, Sheri Ann and Richard Anthony. In 1973 he was honorably discharged and earned the National Defense Service Medal. Rick and Debbie were divorced and Rick met the love of his life, Rhonda Lorraine Crumm in 1977. Rick and Rhonda had two daughters, Valerie Marie and Nicole Lorraine. In 1988 the family moved to Missouri and in 1989 the Mendiola’s made Humansville their home. Rick spent most of his adult life truck driving. Rick was preceded in death by his mother, Clara Emerson, stepfather Kenneth Larson and stepfather Yankee Emerson, father and mother in law Dennis and Pearl Crumm and sister in law Sandi Stidham. Rick is survived by his wife Rhonda of the home, daughters Sheri Ullrich of Ozark, Valerie and husband Phillip of Humansville, Nikki and husband CD of Humansville, son Richard (Tony) of Humansville . Rick also the father figure for Marty and wife Susan of Humansville. Grandchildren Brandy Ullrich, Tyler Ullrich, Brittney Betts, Sarah Bowling, Ryan White, Chase Ullrich, Trey Brewer, Lexie Brewer, Jaz’Myn Baldwin, Kylan Vorwark, Grayson Vorwark, Blake Gwin and Abrielle Brock. Great grandchildren Brynlee , Emma, Kade, Kilee, Zayne, Riley, Denver, Payton, Adalynn and one on the way this summer. Rick is also survived by 3 brothers, Ken and wife Tilly Larson of Humansville, Steve and wife Neva of Ozark, Frank Emerson of Louisiana, and 3 sisters Barbara Brooks of Bolivar, Kathy Emerson of Bolivar, and Christine Emerson of California and many nieces and nephews. Rick was one of a kind. He was ornery and had a smile that was contagious. To know him was to love him. He didn’t know a stranger and could talk to anyone and he usually did…for hours. Rick was definitely never in a hurry and took his time on anything and everything. Rick and Rhonda made a home and family they loved together and spent 45 years loving each other….Rick left his mark on the world that can never be erased… A visitation for Rick will be held on Thursday, January 27, 2022, from 5:00 PM to 7:00 PM at Butler Funeral Home in Humansville. Services for Richard are under the care and direction of Butler Funeral Home of Humansville

Richard Gary Mendiola, 66, of Humansville, MO passed away Friday, January 21, 2022 surrounded by his family and friends. Rick was born May 1,1955 in Atlanta, GA to Clara Goza and Rudolph Mendiola where he lived until he was 2. Rick grew up... View Obituary & Service Information

The family of Richard Mendiola created this Life Tributes page to make it easy to share your memories.

Send flowers to the Mendiola family.