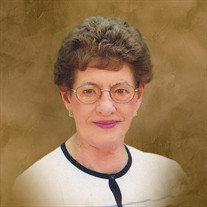 Retha Arlene Wright, 84 of Bolivar, MO passed away Sunday, March 8, 2020 at CMHCF in Bolivar, MO. Retha was born on July 9, 1935 in Bolivar, MO, the daughter of Ira and Elsie (Gent) Landreth. Retha attended school in Bolivar where she graduated in 1953. Retha was united in marriage on October 14, 1955 to Robert Lewis Wright in Fair Play, MO. The couple shared 54 years of marriage together and to this union they were blessed with two sons, Robert Lynn Wright and Brent Allen Wright. After high school Retha worked at the newspaper office, REA, and was the high school secretary for Fair Play R-II School for 22 years before retiring in 1999. Retha enjoyed traveling, attending ball games, reading, and most of all baking cookies. She was known as the "cookie lady" by those who knew her well. Retha was a member of Fair Play First Baptist Church. She is survived by her sons Robert Wright and his wife Patricia, and Brent Wright and his wife Tammy, Grandchildren Kristin Moore and husband Chris, Karla Lewis and husband Josh, David Wright with Kristen VanGorden, Kendal Wright with Samantha Michaelis, and Landon Wright. Great-Grandchildren Cale, Cierra, Aiden, Kolten, Emma, Isaac, and Jacob. Brother, Jack and Mary Jane Landreth. She is preceded in death by her parents, her husband, a sister Wanda Murphy, and great grandson Bentley Lewis. A Funeral will be held for Retha at 2:00 P.M. on Friday, March 13, 2020 at Butler Funeral Home in Bolivar. Friends and relatives are invited to a Visitation with the family from 5:00-7:00 P.M. the evening prior to the service, Thursday, March 12, 2020, at the Funeral Home. Burial will be held in Pleasant Ridge Cemetery in Aldrich. Memorial contributions may be made to the American Diabetes Association.

Retha Arlene Wright, 84 of Bolivar, MO passed away Sunday, March 8, 2020 at CMHCF in Bolivar, MO. Retha was born on July 9, 1935 in Bolivar, MO, the daughter of Ira and Elsie (Gent) Landreth. Retha attended school in Bolivar where she... View Obituary & Service Information

The family of Retha Wright created this Life Tributes page to make it easy to share your memories.

Send flowers to the Wright family.