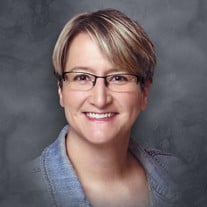 Rachel Dawn Gabani (Bliss) age 44, of Bolivar, Missouri, passed away December, 2019 in her home surrounded by family. Born October 8, 1975 in Springfield, Mo. she is the daughter of the late Leonard Bliss and Donna Bliss of Long Lane, Mo. Rachel is survived by her husband Michal, daughter Michelle, and son Lukas, along with her mother Donna Bliss, brother Steven Bliss and wife Kari, nephews Brady, Paul Wyatt and Eli Bliss of Long Lane, Mo.; sister in law Katarina Gabaniova of Vienna, Virginia; sister in law Zuzana Balintova and brother in law Peter Balint, and nephews Richard and Michal Balint of Prostejov, Czech Republic; father in law Rastislav Gabani and mother in law Alžbeta Gabaniova of Bratislava, Slovakia. She is preceded in death by her father Leonard Bliss, grandparents Paul and Helen Bliss, and cousin Rodney Miller. Rachel grew up in Long Lane, Missouri and was a 1994 graduate of Buffalo High School. She loved the game of basketball and continued playing in college while pursuing her degree in education. In 1998 she graduated from Missouri Baptist with a Bachelor of Arts degree in English. Then in 2013 she earned her Master of Arts degree in Special Education (SPEDS) from Missouri Sate University. While attending Missouri Baptist she met fellow basketball player Michal Gabani whom she would wed and be blessed with two wonderful children Michelle and Lukas. She was a doting mother and enjoyed watching countless ballgames across the countryside. Rachel was a beloved educator and devoted many years as a teacher for the Bolivar School District where she formed many bonds and friendships. She was a member of the Sacred Heart Catholic Church where she found peace and a deep connection with her faith. Rachel was a valued, trusted, and dear friend to many. She has received an out-pouring of support from the community of Bolivar and for that her family is eternally grateful. To give back to the community that has given so much, in lieu of flowers Rachel has requested donations be made to the Keeling Foundation Check can be made payable to the Keeling Foundation for Kids and can be sent to, PO Box 48 Bolivar, MO (Or dropped at their office at 180 Davis Drive, Bolivar, MO 65613, or to the Care to Learn Foundation within the Bolivar School District. https://caretolearn.orgsouthwestregion/bolivar/.com Checks may be made payable to Bolivar Care to Learn and can be sent with Rachel's name in the Memo line: and sent to Bolivar Care to Learn Attn: Amber Davenport, 524 W. Madison St. Bolivar, MO 65613. A Funeral Mass will be held for Rachel at 10:30 AM on Thursday, January 2, 2020 at Bolivar High School Auditorium in Bolivar, MO.

Rachel Dawn Gabani (Bliss) age 44, of Bolivar, Missouri, passed away December, 2019 in her home surrounded by family. Born October 8, 1975 in Springfield, Mo. she is the daughter of the late Leonard Bliss and Donna Bliss of Long Lane, Mo. Rachel... View Obituary & Service Information

The family of Rachel Dawn Gabani created this Life Tributes page to make it easy to share your memories.

Send flowers to the Gabani family.