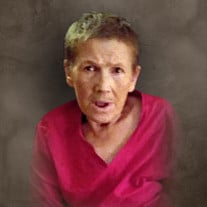 Pamala Kay Davis, 65, of Fair Play, MO passed away Monday, December 30, 2019 at her home in Fair Play, MO. Pam was born in Claremore, Oklahoma on April 20, 1954. For many years, Pam worked diligently on the farm working cattle and processing poultry. She would later moved with the rest of her family in 1995 to the Fair Play area. She continued working on local farms until her retirement in 2005. All of her life, Pam showed great will power. She was a single mother of four children, raising them while diligently holding jobs on the farm. She worked hard, and was rewarded for her labor by those she considered her greatest gifts; her grandchildren and great-grandchildren. Those blessed enough to call her Mimi knew their grandmother’s love in a very special way. Pamela also enjoyed keeping her mind busy by watching westerns, crime shows, and playing games on her phone or computer. Pamela’s resolve and strong will were her trademarks, and she passed those along to her family. She will be dearly missed and her example closely followed. Pamala is preceded in death by her parents; Bill Boswell and Freda Hamilton Boswell, as well as her great-granddaughter, Natalie Rucker. Pamela is survived by her children; Julie (Charles) Sterling of Fair Play, MO, Stephanie (Sean) McDowell of Springfield, VA, Robert (Tina) Davis of Wheatland, MO, Michael(Julie) Davis of Humansville, MO, and Rodney Russell of Fair Play, MO, as well as her siblings; Doris (Norman) Cook, Sharon Peevy, and Melvin Underwood, along with numerous grandchildren, great-grandchildren, nieces, nephews, cousins, and friends. Visitation for Pamala Davis will be held Thursday, January 2, 2020 from 5-7 PM at Butler Funeral Home in Bolivar, MO. A graveside service will be held Friday, January 3, 2020 at Slagle Cemetery in Bolivar, MO. Memorial contributions can be made in Pamela's honor to the Seizure Foundation, the American Cancer Society, or Multiple Sclerosis Foundation.

Pamala Kay Davis, 65, of Fair Play, MO passed away Monday, December 30, 2019 at her home in Fair Play, MO. Pam was born in Claremore, Oklahoma on April 20, 1954. For many years, Pam worked diligently on the farm working cattle and processing... View Obituary & Service Information

The family of Pamala Kay Davis created this Life Tributes page to make it easy to share your memories.

Send flowers to the Davis family.