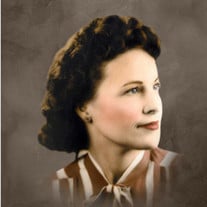 Nora Miller, 100, of Bolivar, MO passed away Monday, March 9, 2020 at Colonial Springs Healthcare Center in Buffalo, MO. Nora was born on December 3, 1919 in Conway, MO to John and Nora Johnston. With her father passing away at an early age, Nora was raised with her 5 siblings by a single mother. With the onset of the Great Depression, Nora quit school after sixth grade in order to help maintain the family. She worked diligently on her sewing skills, and eventually earned a job as a seamstress for Macy’s and JC Penney. During the Second World War, Nora was put to work as one of the original “Rosie The Riveters”. Due to her small frame, she was tasked in fuselage assembly in the converted GM Fairfax Automotive Plant. The skills she and her generation offered were priceless. While Nora was a hard worker, she had a great deal of musical talent that served as a personal joy to her. She loved to play instruments, and taught herself how to play to organ, guitar, and piano. She also took joy in keeping her hands busy with quilting or crocheting. Nora grew up in a difficult period, and those difficulties fortified her personality. She was blessed with a good heart and sense of humor, but she also held a resolve and strong will that was unmatched. What she lost in her 4’11” stature, she made up for with pure grit. Resourceful, loving, and determined, Nora Miller was truly one of a kind. Nora is preceded in death by her parents, John and Nora Johnston; her siblings, William, Joseph (Jody), Anna, Vera, Letta & Oscar Lee, as well as her son, Dean Chapman. Nora is survived by her children; Patsy Admire, Dennis Milford, and Nancy Belcher, as well as nine grandchildren, 11 great-grandchildren, and four great-great-grandchildren. A funeral service for Nora will be held Saturday, March 14, 2020 at 11:00 AM at the Butler Funeral Home in Bolivar, MO. Visitation will be held one hour prior, from 10:00-11:00 AM. Burial will be held in Greenwood Cemetery in Bolivar, MO. Memorial contribution can be made to the Colonial Springs Healthcare Center in Buffalo, MO.

Nora Miller, 100, of Bolivar, MO passed away Monday, March 9, 2020 at Colonial Springs Healthcare Center in Buffalo, MO. Nora was born on December 3, 1919 in Conway, MO to John and Nora Johnston. With her father passing away at an early... View Obituary & Service Information

The family of Nora Miller created this Life Tributes page to make it easy to share your memories.

Send flowers to the Miller family.