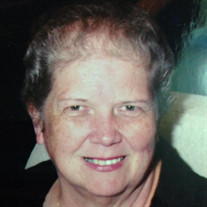 Nancy Ella Rea Keith March 15, 1942 to July 29, 2020 Due to the Pandemic, there will not be a memorial service. She will be placed beside her late husband at Springfield Veterans Cemetery. Arrangements are under the direction of Butler Funeral Home, Bolivar. Nancy Ella Keith, 78, of Bolivar died Wednesday, July 29, 2020 at home with family. Nancy was born on March 15, 1942, the daughter of William and Lena Rea in East Liverpool, Ohio where she grew up with her brother Don, and sisters Marian and Jeanine. Nancy graduated from East Liverpool High School in East Liverpool, Ohio in 1960. She moved to San Diego, California in 1961 where she lived with her sisters while looking for a job. Shortly thereafter she and her sister, Jeanine moved into a trailer in San Diego. Thankfully, she was able to get a secretarial job at General Dynamics which was just down the street. It was the only place close enough to walk to, so she was persistent until they hired her. In January 1962, her sister set her up on a blind date with Dennis Keith. They were engaged on April 27, 1962 and married on September 22, 1962 in East Liverpool, Ohio. After their engagement, Dennis was drafted into the Army and had to leave right after the honeymoon. After basic training he was stationed at Fort Riley, Kansas where they had their first child, Michael, in 1964. After leaving the Army they returned to San Diego where they had their second child, Karen, in 1966. A few weeks later they moved to Orange County, then bought their first home a few months later in Garden Grove, California. They then bought their second home in Yorba Linda, California in 1973 and raised their family before they retired and moved to Bolivar in 1994. Nancy was in Beta Sigma Phi, a philanthropic sorority, for about 20 years in Yorba Linda where she made many good and lasting friendships. In Bolivar, she volunteered at Citizens Memorial Hospital for about 20 years until she got cancer in 2013. She beat cancer, regardless of the 5% chance of survival, and took care of Dennis when he was diagnosed with Alzheimer’s. Dennis lost his battle in 2018. They were one of those one in a million couples that everyone loved and admired. Soulmates for sure. She was preceded in death by her husband Dennis, her parents William and Lena, her brother Don and sister Jeanine. She was survived by her sister Marian, her children Michael and Karen and her husband Randy, adoptive son Aaron, grandchildren Joshua and Kristine and her partner John and two great grandchildren Kairi and Sophia. Family and friends may share memories or leave condolences at www.butlerfuneralhome.com. Memorial contributions can be made to Citizens Memorial Healthcare at 1500 N Oakland, Bolivar, Missouri 65613.

Nancy Ella Rea Keith March 15, 1942 to July 29, 2020 Due to the Pandemic, there will not be a memorial service. She will be placed beside her late husband at Springfield Veterans Cemetery. Arrangements are under the direction of Butler Funeral... View Obituary & Service Information

The family of Nancy E. Keith created this Life Tributes page to make it easy to share your memories.

Send flowers to the Keith family.