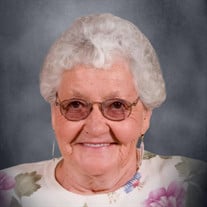 Nada Frances (Taylor) Gannaway, daughter of Manuel Lonzo Taylor and Audrey May (Gannaway) Taylor, was born in Bear Creek, Missouri on March 12, 1930, and peacefully passed away in her home on January 6, 2022 at the age of 91. Nada spent her early years helping care for her eight younger brothers and sisters. At age seven Nada met Eldon Gannaway, the love of her life, on a bridge crossing England Creek while moving with her family to Sand Hill, Missouri. As children, Eldon and Nada enjoyed one another while their families socialized together. One of their favorite memories was going to the movie theater in the Humansville Community Building. For a dime, they could enjoy a movie, popcorn and a drink. Nada and her family moved by horse and wagon to Northern Missouri in 1942 and later moved to Plattsburg, Missouri. Eldon, also, moved north and reconnected with his future wife. At 16 years old, Nada rented an apartment and soon obtained employment at a local telephone company as a telephone operator. After a six-month engagement, Eldon and Nada were married at Preacher Pope’s home in Plattsburg, Missouri on April 15, 1948. They celebrated 73 loving years of marriage. In 1960, the couple moved back to the Bear Creek area, buying a 200-acre farm for $30 an acre. In 1970, Eldon and Nada purchased the farm where they currently reside in Humansville, Missouri. Throughout the years, Nada worked at Hallmark Cards, National Bellas Hess, MFA Farm Supply, local favorite restaurants, and raised cattle on their farm. After many years of hard work, she grew to be the keeper of the home and the matriarch of the family. Her home was always open to anyone who would come and enjoy a fresh pot of coffee and cobbler. There was always a “Wahoo” board full of marbles on her kitchen table surrounded by friends and family. It is safe to say Nada was the most competitive of them all. “Nada’s Noodles” became a favorite at family reunions and a staple of her home. Nada was most known for how big she loved. She was especially proud of her family, which includes husband, Eldon Gannaway; daughter, Debra and husband, Dean Henry; grandchildren, Kaleb Henry and girlfriend Taylor Alton, and Morgan and husband, Austin McKee. Ryder and Copper McKee, great-grandsons, were her pride and joy. Nada is preceded in death by her parents Manual and Audrey Taylor; stepfather Lester Taylor; her brothers Lewis “Buck” Taylor, Everette “Dwane” Taylor, Donald Taylor and David Ray Taylor; her sister Ruby Taylor and a host of wonderful friends and family. She is survived by her loving husband, Eldon Gannaway; daughter Debra and husband Dean Henry; grandchildren Kaleb Henry and girlfriend Taylor Alton, and granddaughter Morgan and husband Austin McKee; two special great-grandchildren Ryder and Copper McKee; sister Audrey “Catherine” Taylor; brothers James Alden Taylor and Paul Edward Taylor, and many wonderful other family and friends. Nada was a loving wife, mother, grandmother, great-grandmother, sister, aunt and friend. We celebrate her wonderful life and will always cherish the many beautiful memories. A celebration of life will be held 2:00 PM Monday January 10, 2022 at the Butler Funeral Home in Humansville, MO. The family will receive friends from 1:00 PM to 2:00 PM Monday, January 10, 2022. at the funeral home. Burial will take place in the Alder Cemetery. Memorial contributions can be made to the Three Wishes for Ruby's Residents 102 W. Stephens Ave Harrison, AR. or Baxter Regional Hospital Foundation 624 Hospital Dr. Mountain Home, AR 72653.

Nada Frances (Taylor) Gannaway, daughter of Manuel Lonzo Taylor and Audrey May (Gannaway) Taylor, was born in Bear Creek, Missouri on March 12, 1930, and peacefully passed away in her home on January 6, 2022 at the age of 91. Nada spent her... View Obituary & Service Information

The family of Nada Gannaway created this Life Tributes page to make it easy to share your memories.

Send flowers to the Gannaway family.