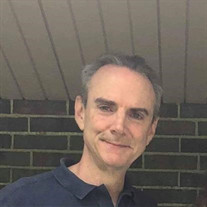 Morgan William Dooley was born October 1, 1964 in Springfield, MO to Charles and Virginia (Hendrickson) Dooley. He passed on from this life suddenly on July 21, 2019 in Los Angeles, CA at the age of 54. Morgan grew up in Bolivar, graduating from Bolivar High School in 1982. In high school, he was active in FBLA, Mixed Chorus, band and tennis. He was a member of the United Methodist church. He graduated from SMSU (now Missouri State) in 1986, majoring in Business and Industrial Communications. He worked in Clayton, MO as a paralegal before returning to school at the University of Missouri-Columbia for his Masters’ Degree in Information Science and Learning Technology. Morgan always wanted to live and work in the big city. Upon graduation from MU, he took an opportunity to move to Taichung, Taiwan and began work teaching English to young children through drama and plays. He also tutored adults in English. He later moved to an even bigger city, Taipei, where he was currently employed as Assistant Professor in Applied Languages at Ming Chuan University. He again taught English and drama, writing and producing plays and continued to tutor adults in the English language. A few years ago, Morgan was awarded the Teaching Excellent Award an honor through the University given only after many steps of qualifications and approval. He was very proud of this achievement as with being named Assistant Professor at Ming Chuan in April 2018. He had numerous articles published in educational magazines and in 2016, a book entitled Taiwanese University EFL Students’ Acquisition on L2 Culture through Popular Films. His most recent play was presented May 31st by the Applied English Drama Class called “Madeline’s Taiwanese Journey” with Morgan as playwright and co-producer. He is preceded in death by his parents, grandparents and a cousin Daniel Dooley. Morgan is survived by his life partner, Jason Liu also of Taipei, Taiwan; a sister Shelley Hancock (Steve) of Bolivar; step mother Nancy Dooley, step brother Kenny (Carrie) Mackey of Springfield; nieces: Amanda, Ashlee, Veronica and Emma Hancock, Faith Clark of Bolivar Jillian (Chris) and Natalie Dillon of Springfield; nephews: Shannon (Janieca) J.W. Hancock and K. C. (Wendy) Mackey of Los Angeles, California; an aunt, Cheryl Brewer (Michael) of Columbia, an uncle, Gary Dooley (Judy), Pleasant Hope, many cousins, some of whom thought of him as a brother and numerous friends and students. A memorial service will be held 4:00 PM Sunday, August 11, 2019 at the Open Hearts Bolivar Untied Methodist Church. Visitation will be held one hour prior to service from 3:00 PM to 4:00 PM at the church.

Morgan William Dooley was born October 1, 1964 in Springfield, MO to Charles and Virginia (Hendrickson) Dooley. He passed on from this life suddenly on July 21, 2019 in Los Angeles, CA at the age of 54. Morgan grew up in Bolivar, graduating... View Obituary & Service Information

The family of Morgan William Dooley created this Life Tributes page to make it easy to share your memories.

Send flowers to the Dooley family.