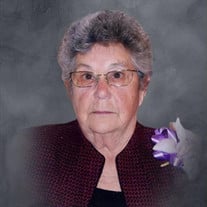 Mildred (Jenkins) Erven She was called by many names, Mom, Ma, Mick, Memaw, and GG. She was the first of three children born to Oliver and Verda Jenkins, given the name of Mildred Vearl. She attended school in Polk County, MO and graduated from Bolivar High School with the class of 1944. She was saved as a young girl and joined Pleasant Hill Missionary Baptist Church where she remained a member until her death. Also in 1944, she married Roscoe Erven, who was later ordained as a deacon and thus, Mildred spent the majority of her life as a deacon’s wife. The couple had one child; a son named Ronnie Dean. Except for a few years while Roscoe was working in California, the family spent their lives in Polk County. Mildred was a homemaker until Ron was in High School; she then worked at various Bolivar businesses, most notably Teters Florists and Horton’s Department Store. However, when her grandchildren moved to Bolivar, she undertook her favorite job, that of a babysitter to Tiffany and Derek. Mildred liked to sew and made many outfits and Halloween costumes for her grandchildren. She crocheted, as well, having made hundreds of beautiful Christmas ornaments and stuffed animals for her grandchildren and afghans for everyone else! She also loved working in the garden with Ros, tomatoes being their prized crop. Her house was always spotless and organized, even all the plastic bags and cottage-cheese containers she’d never throw away. She enjoyed raising flowers and cooking. After having lived in California, she started the family tradition of having tacos at Christmas in the early sixties when Bolivar didn’t have any Mexican restaurants. Every Christmas Eve she would stand at the stove frying tortilla shells until everyone was stuffed. Only then would she sit down and eat. She was well-known for her baking; coconut cream and pecan pies, strawberry cakes, and to-die-for apple dumplings! Preceding her in death were her parents, Olivar and Verda Jenkins, husband Roscoe Erven, brother John Jenkins and sister Willa Mae Sullivan. Leaving to mourn her death are her son, Ron (Marinell) Erven; granddaughter Tiffany (David) Hockanson, grandson Derek (Candi) Erven; great-granddaughters Alexandra (Austin) Moore, Cannyon Goff; great-grandson Zane (Alexis) Erven and their three blessings in the form of great-great-granddaughters, Rain and Noah Moore and Evelyn Erven. Our matriarch is gone but will be remembered and missed by all who knew her. A visitation for Mildred will be held from 10:00 AM to 11:00 AM on Wednesday, March 9, 2022, at Butler Funeral Home in Bolivar. A graveside service will be held at 11:30 AM on Wednesday, March 9, 2022, at Pleasant Hill Cemetery.

Mildred (Jenkins) Erven She was called by many names, Mom, Ma, Mick, Memaw, and GG. She was the first of three children born to Oliver and Verda Jenkins, given the name of Mildred Vearl. She attended school in Polk County, MO and graduated... View Obituary & Service Information

The family of Mildred Vearl Erven created this Life Tributes page to make it easy to share your memories.

Send flowers to the Erven family.