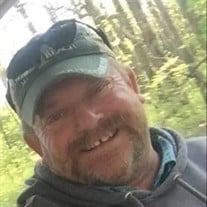 Michael (Mike) Craig Royston 45, formerly from the Webster County Missouri area passed away on Monday, June 15, 2020 at Cox Hospital after a sudden illness. Mike was born February 8, 1975 in Springfield, MO. Mike was preceded in death by his father Don Royston, his stepfather Tom Sneath, his Uncle Doug Hulsey, Aunt Jean Luedde grandparents Earl and Iona Royston and Tony and Shirley Hulsey, several cousins and close friends. Mike is survived by his mother, Carolyn Sneath of Hermitage MO. His children Mikelah Underwood of Columbia, MO, Dylan Royston (Tucker)of Springfield, MO, Jaden Harleman of Marshfield, MO, Brooke Miller (Dakota) of Fair Grove, MO, Breann Pentecost of Springfield, MO and Cierra Pentecost of Fair Grove MO. His three grandchildren Reagan, Kylie and Geo. Also surviving is his sister Teri Redd (Mike) of Hermitage MO. Nepews and nieces Jesse Jones (Bethany), Cheyanna Jennings (Cody), Taylor Funk (Zach). Great niece and nephews Dusty Jones and Hadley Jones and Will Funk. His Uncle Tony Hulsey and many other cousins and family members. Special long time buddy Kyle Thomas of Seymour MO. Many many other friends from all around the US!! To know this wild and crazy cowboy was to love him. When he was younger, he and his best four legged friend, Dunny aka Elvis, could be found at all the area Ropins. He and Dunny rode many miles in Fordland and Seymour through the years. Mike worked as a plumber for many years although his favorite "job" was farming. From his childhood years raking hay with our dad til recently he was most likely found on some ole John Deere tractor working the fields.....or maybe just cruising town on one, ya never knew for sure! Mike was an avid story teller and could keep you rolling and laughing in the floor til your sides hurt with the stories he toldl!! He never met a stranger. He would talk to anyone. My big little brother was as ornery as the day is long. He lived life the way he wanted and made many friends along the way. A free spirit that couldn't be tamed and we wouldn't have wanted him any other way. In the last week I have talked alot with the most recent friends he had made(who called him family). They called him Big Mike and they adored him and are hurting alongside all of us. In the last few years we have been told he has helped many people that needed help and that makes our shattered hearts smile. The loss of this man will leave a void that can never be filled. We love you Michael, Dad, Papa, Bub, Uncle, may you Rest in Peace!! Last but not least, I have to mention who he called his hateful but beautiful and amazing buddy Marti, he asked for us to get her to him when he went into the hospital. He told me he felt safe knowing she was around because she would make sure he was taken care of. Marti, you were so important to him. Services will be Wed, June 24, 2020 at Butler Funeral Home in Bolivar, MO. Visitation at 9:00 am Memorial Service at 10:00 am Burial will be at Dooley Bend Cemetery near Pomme de Terre Lake following the service.

Michael (Mike) Craig Royston 45, formerly from the Webster County Missouri area passed away on Monday, June 15, 2020 at Cox Hospital after a sudden illness. Mike was born February 8, 1975 in Springfield, MO. Mike was preceded in death by his... View Obituary & Service Information

The family of Michael Royston created this Life Tributes page to make it easy to share your memories.

Send flowers to the Royston family.