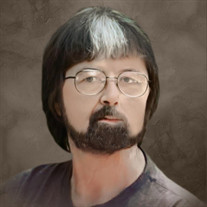 Michael W. Jarnagan 63, passed away Sunday, March 28, 2021, at his home in Sapulpa, Ok. He was a great Dad to his son for 32 years and Known as Uncle Mike to all the kids in his life. Michael was born in Webb City, Mo on November 27, 1957 to Lena Jean Jarnagan and Harry Etheridge. He was raised by his Step-Dad Jack Fair. Michael is survived by his son, David J. Cross, his cousins, Ricky Joe Gooding, Dustin Gooding, Donna Mann, Shelby Gooding, his Uncle Don Gooding, and all his friends. In lieu of flowers, the family would like donations to The Toy’s for Tot’s program. Visitation for Michael will be Friday, April 2, 2021 at 10:00 A.M. at Butler Funeral Home. Services will be Friday, April 2, 2021 at 11:00 A.M. at Butler Funeral Home, Bolivar, Missouri, with burial at Crestview Cemetery, Bolivar, Missouri.

The family of Michael Jarnagan created this Life Tributes page to make it easy to share your memories.

Send flowers to the Jarnagan family.