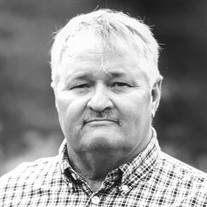 On Tuesday, September 1, 2020, Michael Kim Carter, loving husband, and father of three passed away at the age of 63 in his home. Mike was born on August 18, 1957 in Springfield, Missouri to Vernon and Elma Jean (McColm) Carter. Mike was saved on September 1, 1975 at Pleasant Hill Missionary Baptist Church and joined September 7, 1975. He graduated from Halfway High School in 1975. He worked for Independent Electric in Springfield, Mo for 30 years, then was able to farm, which was his passion. On April 18, 1976 he was united in marriage to the love of his life Rhonda G (Stogsdill) Carter. To this union 3 children were born. Mike was a wonderful husband, father, and papa. He always put family first and was willing to do whatever work was needed to provide and take care of them. He is survived by his loving wife of the home; his daughters Judiann Sutt and husband Troy of Flemington, MO and Kimberly Foster and husband Jason of Morrisville, MO; a son, Michael Carter and wife Melissa of Halfway, MO; grandchildren, Zachary and Madison Sutt, Ireland and Aidan Foster, Michael, Keaton, and Brantley Carter; Cailtin Maxwell and husband Cody, Bubba Howe and great grandson Fletcher Maxwell. A sister, Jane Francka and her husband Raymond of Bolivar, MO; a brother, Mark Carter; his mother-in-law, Mary Lou Stogsdill of Weaubleau, MO; sisters-in-law, Darwina Stewart and her husband Wendell and Roberta Bledsoe and her husband Eddie; his aunts, Willa Strader and Nelda Carter. As well as a host of nieces, nephews, extended family and friends. Mike is preceded in death by his parents Vernon and Jean Carter; his father-in-law, Darwin Stogsdill, and a sister-in-law, Carol Brewer. He will forever be missed by many and although his time here with us feels like it was cut short he will forever be near to so many through the memories he left us with, knowledge he shared and the life he lived. Visitation will be Friday evening from 5-7 P.M. and a graveside service will be the following day for family and close friends at 10 A.M. Arrangements for Mike are under the care and direction of the Butler Funeral Home.

On Tuesday, September 1, 2020, Michael Kim Carter, loving husband, and father of three passed away at the age of 63 in his home. Mike was born on August 18, 1957 in Springfield, Missouri to Vernon and Elma Jean (McColm) Carter. Mike was saved... View Obituary & Service Information

The family of Michael Kim Carter created this Life Tributes page to make it easy to share your memories.

Send flowers to the Carter family.