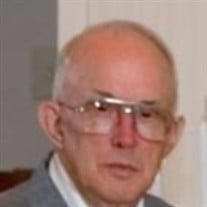 Mervin F. (“Buck”) Lightfoot, age 84, formerly of Bolivar, passed away Wednesday, Oct. 27, 2021, at his home in Cedar Creek, Missouri. He was born near Adonis, Missouri on Dec. 19, 1936, the son of Harvey and Mertie Lightfoot. He was saved as a youth, and had a deep and abiding faith in his Lord and Savior throughout his life. On April 28, 1957, he married the love of his life, Glenda Lou Ingram, and into this union three children were born: Mickey, Melody, and Marsa Lea. Buck graduated from Hermitage High School at age 16, and subsequently from Draughn Business College. He was employed in management with Jones Truck Lines for several years; then he and Glenda established a dairy farm in 1972. They continued that operation until semi-retirement beckoned, and they moved to the Branson area. Buck enjoyed working at Silver Dollar City for a time, acquired law-enforcement training, and joined the Taney County Sheriff‘s Department for a number of years. After fully retiring, he and Glenda took to the road in their RV, wintering in the Texas Gulf Coast area, and to the East Coast in the summer months. They spent several years in Florida, before returning to Missouri and settling once again in the Branson area. Buck was preceded in death by his parents, sisters Iva Mae Cansler and Erma Faye Ingram, and infant daughter Marsa Lea. He is survived by his beloved wife of 64 years, Glenda, daughter Melody (Rick) Roberts of Bolivar, son Mickey (Twyla) Lightfoot of Springfield, grandchildren Douglas (Jessica) Lightfoot of Willard, Ashley (TJ) Ross of Springfield, Patrick (Samantha) Roberts of Walnut Grove, and four cherished great-grandchildren, along with his extended family of nieces, nephews, their spouses and children. Per his request, Buck will be laid to rest in Payne Cemetery, with a private family service held at the gravesite, on Sunday, October 31st at 2:30 p.m., under the direction of Butler Funeral Home.

The family of Mervin Francis Lightfoot created this Life Tributes page to make it easy to share your memories.

Send flowers to the Lightfoot family.