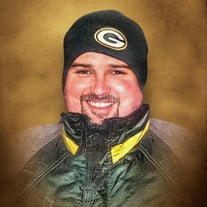 Matthew John Siems, age 42, left his life on earth Sunday, Feb. 21, 2021, following a short illness. Matt graduated from Bolivar High School in 1997 where he loved playing golf and football where he wore jersey No. 77. He was proceeded in death by his grandparents, Chuck and Sandy Stanbro; and Dale and Gladys Siems all of Charles City, Iowa. He is survived by his parents, Barry and Leesa Siems of Bolivar; son Austin Siems, of Kansas City; daughter MacKenzie Siems of Bolivar; and Zoey Siems of the home; and their mother, Shyla Siems; granddaughter Maddilynn; sister Brandi Siems of Bolivar; brother Steve Pickens and wife Rachel of Colorado; as well as a host of aunts, uncles, nieces, nephews and cousins. Matt was a loving father, son, brother, uncle and friend. Anyone who knew Matt knew his sense of humor and his love of the Iowa Hawkeyes and the Greenbay Packers. Since his passing, friends have reached out and overwhelmingly have described him as one-of-a-kind, nicest guy a person ever met, funniest person they knew, and a father who fiercely loved his children and his family. His daughter Zoey explained it best by simply saying, “He was all of it.” One of Matt’s favorite things in life was to pick on his little sister, Brandi. They constantly bantered back and forth to see who would get in the best jab – they both declared themselves the winner. When there was mischief to be had, they were partners in crime. Many of you reading this will know of a few of their shenanigans and may have even participated in one or two. Matt’s most recent obsession and love was his beard. He and his brother, Steve, shared many, many tips and tricks on beard etiquette and attire; their beard-bond was a strong bond. Matt was a favorite to his nieces and nephews, and they too remember Uncle Matt as a jokester. Many laughs were had on road trips, camping trips and just hanging out. Matt gave his mom her most treasured gift in life that of being a mom. Matt loved playing golf with his dad, but his favorite times with him were spent watching the Hawkeyes and the Packers. Their trips to Lambeau Field were definitely some of life’s best times! Matt will be missed by all, but he gave us all a gift to hold on to for life; the gift of a chuckle and a smile with every memory of him. Fly high and free Matt – until we meet again, GO PACK GO! A celebration of life will be held at Butler Funeral Home Saturday, March 6, with a visitation from 10 a.m.-12 p.m., followed by a memorial service at 12:30 p.m. Please join the family at Silo Ridge County Club following services to toast Matt. In lieu of flowers, donations for Matt’s memorial expenses may be sent to Butler Funeral Home in the name of Barry Siems.

Matthew John Siems, age 42, left his life on earth Sunday, Feb. 21, 2021, following a short illness. Matt graduated from Bolivar High School in 1997 where he loved playing golf and football where he wore jersey No. 77. He was proceeded in death... View Obituary & Service Information

The family of Matthew Siems created this Life Tributes page to make it easy to share your memories.

Send flowers to the Siems family.