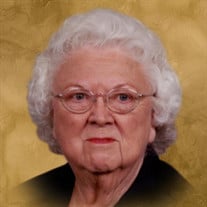 Mary Ellen Fullerton, the second of five children of Donald Raif “Jerry” and Grace Jane Hargis Fullerton, was born August 28, 1927 in Polk County. She passed away on Friday, September 25, 2020, at the age of 93. Mary lived her entire life in or near Bolivar. She attended one-room schools and graduated from Bolivar High School, where she was a member of the Bolivar High School Hall of Fame. She attended Southwest Baptist University and Missouri State University, earning a bachelor’s degree in education. She also earned a master’s degree in guidance counseling from Drury University, where she was awarded a Drury University Alumni Award for service to education. She taught in a one-room school for nine years. She then taught for 48 years in the Bolivar school system, retiring in 1993 as a guidance counselor. For more than 60 years, she was a member of the Missouri State Teachers Association. For almost 60 years, she was a charter member of Kappa Kappa Iota, a teacher service sorority. In her later years, she was a member of the Missouri Retired Teachers Association, the Polk County Retired Teachers Association, the Matilda Polk Campbell chapter of the Daughters of the American Revolution, the Polk County Genealogical Society and CMH Auxiliary. In 1993, Mary became the manager of Rose Park senior citizens housing and held this position until 2010 when she retired again. While serving as manager of Rose Park, Mary received the Manager of the Year Award. At an early age, she accepted Jesus Christ as her savior. At the time of her death, she was one of the oldest members of the Mt. Gilead United Methodist Church. Mary was preceded in death by her parents, one sister, Jane Fullerton, two brothers, Robert Eugene Fullerton and his wife Marjorie Ball Fullerton, and Donald Dean Fullerton along with nephews, Clint McCallister and Roy Albin. She is survived by one sister, Lucinda ‘Cindy’ Fullerton Stewart and her husband Glenn of Bolivar. She is also survived by nine nieces and nephews and several great nieces and nephews: Bob’s daughters, Marilyn Albin and their children, Marcie Kelsey and Andy of Bolivar; and Carolyn McCallister and her son Kyle and his wife Jessica of Springfield. Cindy’s sons, Jerry Dale Stewart of Bolivar; and Terry Glenn Stewart and his wife, Ronda along with daughters Addie and Emma, all of Bolivar. Don’s children, Jane Ellen, and her husband, Terry Lemons, and their children, Benjamin and Sarah and her husband, Jonathan Larios, of Bristow, Va.; Leslie and her husband, Jim Hutter, and their children, Tate, Hayes, Gibbs and Tess, of Springfield; Betsy and her husband, Stewart Eckols and their sons Blace and Trey of St. Louis, and their daughter Alexandria and her daughter Ashlar, of Texas; and Jeffrey and his wife, Tommi Fullerton, ad their children, Logan, Raif, Reed, and Rhett, of Bolivar; and Jennifer and her husband, Jim Ernst, and their daughter, Carly, of Bedford, Iowa. In lieu of flowers, memorial contributions can be made to the Missouri Retired Teachers Association Foundation Endowment, The Mt. Gilead United Methodist Church, or the Mt. Gilead Cemetery Fund in care of Butler Funeral Home.

The family of Mary Ellen Fullerton created this Life Tributes page to make it easy to share your memories.

Send flowers to the Fullerton family.