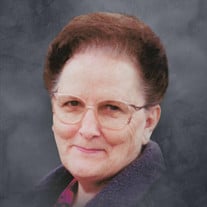 Louise Countryman Hite was born April 9, 1930, in Santa Paula California, and departed this earthly home for her heavenly home Thursday, November 12, 2020, at the age of 90 years, 7 months and 3 days at Colonial Springs Healthcare Center in Buffalo, Missouri. She was the daughter of Jackson and Levada Countryman, and married Billy Junior Hite on June 9, 1949, in California. To this union two daughters were born-Kathy and Lorna. Billy and Louise lived in Missouri for several years before moving to Fresno, California, in 1963, where Bill worked as a backhoe operator for 17 years. After retiring, Bill and Louise returned to Missouri where they remained active in agriculture. Louise was saved at an early age, and Bill got saved when he met Louise. They both were members of the Bolivar Assembly of God Church. Louise was always active in women's events and ministries in her church. Bill and Louise were married for 56 years until Bill passed away in 2005. Her heart was with her family and she was always busy playing with her children and grandchildren. As her daughter Lorna said, "She was such a fun Mama!" Her laugh was a joy to hear! She changed the lives of her nieces by showing them that it was okay to have ice cream any time of the day or night, even when it wasn't a special occasion, and that Easter eggs should be hidden several times on Easter. "Nanny," as she was called, even by those that were not her grandchildren, would always participate in any game that was being played. There are so many fun times to remember¬running in the rain together, Nanny taking the kids down to the scary part of town in Fresno in their pjs and getting caught on a one-way street and then all of us getting so tickled that we laughed until we cried, always eating sweets at her house, her amazing love for others, and the cute twinkle that was always in her eye-almost an ornery twinkle! Even though she was a quiet person, Louise was a delight to all who knew her, and she will be a welcome addition to heaven and will leave a huge hole for those of us who loved her on earth. Her last 5 years were spent in the cruel grip of Alzheimers, so it is wonderful to know that she is whole and laughing again in heaven. She was preceded in death by her mother and father, her beloved husband, her oldest daughter Kathy Lynn Rutz, and all eight siblings: a twin brother Louis, four other brothers: Kenny, Auburn, Tom and Jay, and three sisters: Margie Oliver, Minnie Baxter, and Billie Countryman. All of her siblings resided in California. A dear brother- and sister-in-law Berkley and Martha Hite also preceded her in death. She is survived by her daughter Lorna Dismang and husband Doyle of Pleasant Hope, son-in¬law Jerry Rutz of Fresno, CA, and four beloved grandchildren: Kari Rutz Mercer and husband Dave of Fresno, CA, Scott Rutz of Los Angeles, CA, Shane Ireland and wife Kim of Pleasant Hope, and Cody Dismang, also of Pleasant Hope, as well as three great-grandchildren: Brody Mercer, Logan Mercer, and Lexie Ireland. Several nieces, nephews, cousins, and many dear friends also mourn her passing. Services will be under the care of Butler Funeral Home in Bolivar, Missouri. A visitation will be held Saturday, November 14th at Butler Funeral Home from 2:00 to 4:00 P.M. and a graveside service will be on Sunday, November 15th at Greenwood Cemetery in Bolivar at 2 p.m. with Rev. Gary Ankrom officiating. The music will be "Serenaded by Angels" and "Beulah Land." Burial will be at Greenwood Cemetery, Bolivar, Missouri. Memorial contributions can be made to the Alzheimer's Association in care of Butler Funeral Home, 407 e. Broadway, Bolivar, Missouri 65613 in lieu of flowers.

Louise Countryman Hite was born April 9, 1930, in Santa Paula California, and departed this earthly home for her heavenly home Thursday, November 12, 2020, at the age of 90 years, 7 months and 3 days at Colonial Springs Healthcare Center in... View Obituary & Service Information

The family of Louise Edna Hite created this Life Tributes page to make it easy to share your memories.

Send flowers to the Hite family.