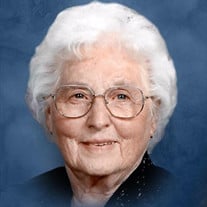 On the evening of June 11, 2021 Heaven’s pearly gates opened to allow the newest alto for heaven’s celestial choir to enter Louise Alburta (Warner) Barker. Louise was born June 4, 1927 in Lowry City, MO to the parents of Samuel and Helen Warner. Louise’s childhood years were marked with many life lessons, one such lesson was living in a tent year round for a period of time. At age 14 Louise accepted Christ has her savior at the First Assembly of God in Bolivar and shortly thereafter joined that church. When she was older she would walk home from school and a carpenter, building a house, would tease her and say he was building this house for them…after much cajoling she consented to marry Charles V Barker and they married on August 13, 1949. This union produced four children: Linda Carol, Charles Stephen, John William, and Patricia Louise. Louise and her family were very active in the Bolivar Assembly; her loving husband teased…if the lights were on and the doors unlocked you would find Louise there. She taught several different levels of Sunday School with the Junior Boys being her favorite. She was very active in the women’s WM’s and she arranged many meals, for families during their time of bereavement. She was most active as a prayer warrior. If Louise knew you, she had most likely been on her knees requesting peace and will be upon your life. A TRUE PRARYER WARRIOR. Louise and her loving husband now await the arrival of Linda Carol and Gary Ankrom of Bolivar, Charles Stephen and Tammy of Bolivar, John William and Julie of Rogersville, MO, and Patricia Louise and Joe Hirner of Hannibal, MO. In addition to their 13 grandchildren and 15 great-grandchildren. Services for Louise will be 10:00 AM Wednesday, June 16, 2021 at the Assembly of God Church in Bolivar, MO. Visitation will be held 5:00 PM - 7:00 PM Tuesday, June 15, 2021 at the Butler Funeral Home in Bolivar, MO. Burial will take place in the Greenwood Cemetery in Bolivar, MO.

On the evening of June 11, 2021 Heaven&#8217;s pearly gates opened to allow the newest alto for heaven&#8217;s celestial choir to enter Louise Alburta (Warner) Barker. Louise was born June 4, 1927 in Lowry City, MO to the parents of Samuel and... View Obituary & Service Information

The family of Louise Alburta Barker created this Life Tributes page to make it easy to share your memories.

Send flowers to the Barker family.