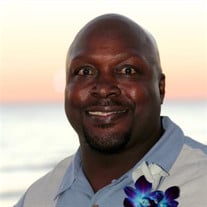 Lester Earl Baker was born on November 23, 1966, to the late Floyd Baker Sr. and Willie Mae Mitchell in Wharton, Texas. Lester was loved by his seven brothers, Charles, Ivory, Larry, Dennis, Anthony, Bobbi, Pete and four sisters, Iva, Mary Ann, Fannie, and Mildred. His connection with Momma, his siblings, and his family cultivated his unique ability to bring people together. Throughout his life, he showed endless compassion and an understanding that the bigger the family, the more love and blessed you are. Lester stood out as a star athlete while attending Elementary, Middle, and High School in Needville, Texas. Lester went on to earn his Bachelor of Science in Psychology from Southwest Baptist University in 1990. A highlight of his life was playing football for the SBU Bearcats, where he made lifelong friends and set several program records. During his tenure at SBU, Lester earned the nickname “Shake-N-Bake" as a member of the SBU Football team from 1985-89. He was a team captain in 1987 and 1989. Lester's athletic accolades include being named to the Football Gazette All-American Second Team, MIAA Offensive Player of the Year, being inducted into SBU's Hall of Fame in 2009. In 2014, he was inducted into the Missouri Sports Hall of Fame's Elite 11 class. After his collegiate success, he thrived in his career coaching football for Bolivar High and working with youth in the school district. He loved cheering on his beloved Dallas Cowboys, Texas Longhorns, and the occasional Chiefs in his Man Cave with his friends. Pinnacle to his lifetime of accomplishments is meeting and marrying the love of his life, Tina Baker. On August 2, 2012, they were married along Sanibel Island in Florida and were looking forward to returning to celebrate their tenth anniversary. He was a devoted husband, her rock through several trials, and forever focused on her happiness in their life together. Lester's family was essential to his happiness in life. He always prioritized celebrating life's little and big moments with his children: daughters Ashli Baker and Dani Bennett and his sons Ashton and Aidyn Baker and Dom Bennett. He was so incredibly proud of their accomplishments and who they have grown up to be. He thoroughly enjoyed his most recent role becoming Papa Lester to adorable grandchildren Aria Baker, Abigail, and Noah Bennett. He is also blessed with two wonderful daughters-in-law Casey Bennett and Lex Shawbaker. Lester's love language was barbeque, bringing his family and friends closer together. He expressed his love each time he fired up one of his pits. He never missed a chance to care for others by showcasing his patience and unmatched skill with charcoal, defining the term 'grill and chill.' He elevated weekends, evenings, and average Tuesdays with his barbecue. Lester's dedication to being a Pitmaster is only matched by his devotion as a husband, father, grandfather, brother, son, and friend. On the morning of Thursday, June 24, 2021, he departed this life at home with his loving wife Tina by his side in Springfield, Mo. Lester was preceded in death by his Father, Floyd Baker, Sr., Step-Dad, Terrance Mitchell, sister, Mary Ann Murray, brothers, Bobbie Joe Baker and Charles Ketchum (Cedric Dubois Cinque) Maternal Grandparents: William and Alberta Paul, Paternal Grandmother: Delores Baker, Nieces: LaTonya Ketchum and Anjonique Ketchum, and Nephew: Denzel Thomas and several other family members. He is survived by many loving family members, most notably his Momma, Willie Mae Baker, and his wife, Tina Baker. Until the next time we meet, Baker Baker One Nine. We have created a memorial account in Lester's name to help with expenses and Aiden's needs. The account is at LimeBank. You can stop by at 1630 S. Killingsworth or 111 W Jackson to donate or mail a check to LimeBank P.O. Box 850 Bolivar, MO 65613. Tony Berry and Jack Randolph will be the administrators of this account. Visitation for Mr. Lester Baker will be held at the Bolivar High School Auditorium Sunday, June 27, 2021 from 1 P.M. until 3:00 P.M. Lester's funeral service will be held in the same location starting at 3:00 P.M. A live stream for Lester will be available at the time of the service on our Facebook page.

The family of Lester Baker created this Life Tributes page to make it easy to share your memories.

Send flowers to the Baker family.