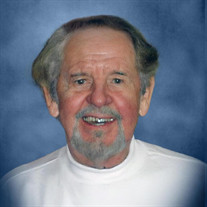 Leo Fellers of Bolivar, Missouri, passed away on Sunday, November 14, 2021, at his residence in Bolivar at the age of 89. He was born on November 8, 1932, in Pittsburg, Missouri, the son of Abner and Hesper Fellers. Leo attended high school in the Pittsburg area and later moved to Kansas City. In 1962, Leo married Dottie Gray, together they built a life and home which they shared for many years. During the Korean War, Leo served in the United States Army until receiving an honorable discharge in 1955. After his military service, Leo owned and operated Eastside Plating, a chrome shop in the Kansas City area. He continued his work for over 30 years. During his time in the platting business, he fine-tuned a lifelong hobby and interest involving street rods. Closer to his “retirement”, he began building his own vehicles and became active with the NSRA (National Street Rod Association.) His love for the hobby and pride in his work was notable with Leo winning multiple awards for his vehicles. One of his vehicles, a 1936 Ford, won the NSRA Top 10 award several times over. Leo also won the award for best Mopar in the United States with his 1947 Dodge. When he wasn’t busy with a project in the shop, Leo would join in with friends taking part in another lifelong interest: Music. He loved to play the guitar and sing, blessed with the talent to back it. He cherished his time with family and included them in his many adventures. Leo was preceded in death by his parents, Abner and Hesper Fellers, His brother Leon Fellers and a son, Tom Clark. He is survived by his wife Dottie Mae Fellers of Bolivar, and four children: Terri Hillman of Bolivar, Ira Clark and His wife Kelly of Independence, Missouri, Linda Durbin and her husband Bob of LaCygne, Kansas and Larry Fellers and his wife Gina of Peculiar, Missouri along 10 grandchildren and great grandchildren, and several other relatives and friends. Services for Leo will be held Friday, November 19, 2021 at 2:00 P.M. in the Butler Funeral Home. Visitation will be held one hour prior to the time of service. Burial for Mr. Fellers will take place immediately following the service at the Greenwood Cemetery in Bolivar.

Leo Fellers of Bolivar, Missouri, passed away on Sunday, November 14, 2021, at his residence in Bolivar at the age of 89. He was born on November 8, 1932, in Pittsburg, Missouri, the son of Abner and Hesper Fellers. Leo attended high school... View Obituary & Service Information

The family of Leo D Fellers created this Life Tributes page to make it easy to share your memories.

Leo Fellers of Bolivar, Missouri, passed away on Sunday, November...

Send flowers to the Fellers family.