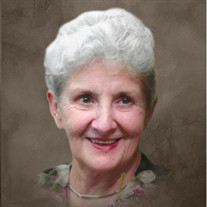 Mary Kay Kump passed away Thursday March 26, 2020 with her loving family by her side .Kay was on born June 22, 1940 in Kansas City, MO to Leslie E. and Katherine U. Martin. In January of 1958 she was united in marriage to Bob R. Kump of Bolivar. They were married for 62 years and raised 4 children together, as well as fostered several other children. Kay was raised a city girl, but in 1969 moved to the Humansville area where she thrived. She loved cultivating a garden and canning the fruits of her labor. Her pickled beets are a favorite family staple. She became an expert at tending and mending the many animals that became part her menagerie. Kay was very active with the Humansville schools during her children's tenure there. As PTA president during the time of the Humansville centennial in 1972, she helped to organize the publication and sales of a community cookbook. Kay accepted her Lord and Savior and was baptized in 1970 at the First Baptist church of Humansville. She later moved her membership to Rondo Baptist Church, and enjoyed the Sunday evening monthly gospel singings. In 1976 she and Bob moved to the Wheatland area, and in 1982 moved to Bolivar. Kay was a homemaker, but worked outside of the home as well. Most recently she was the office coordinator at CMHCF until her retirement. She is survived by her husband, Bob of Bolivar, daughter, Bobbie Simmons (Don), daughter, Billie Gibbens, (Matt), Son, Kenny (Susan) and Marcia Kump. Eight grandchildren, and four great-grandchildren, 3 sisters, Joy, Anita and Sissy. Many nieces and nephews. Kay will be remembered as a kind and caring person who was loved by many. She had a wonderful caring disposition that lent itself to the elderly. She lovingly cared for her own parents and in-laws during their final days, as well as ministered to many other elderly friends and neighbors during her lifetime. Due to the unprecedented circumstances we are all dealing with at this time, a celebration of life will be planned for a later date. If you feel so inclined, please make a donation to St. Jude's Children Hospital in Kay's name, a favorite charity that she supported for many years.

Mary Kay Kump passed away Thursday March 26, 2020 with her loving family by her side .Kay was on born June 22, 1940 in Kansas City, MO to Leslie E. and Katherine U. Martin. In January of 1958 she was united in marriage to Bob R. Kump of Bolivar.... View Obituary & Service Information

The family of Kay Kump created this Life Tributes page to make it easy to share your memories.

Send flowers to the Kump family.