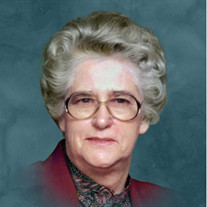 Katie Catherine Harmon ‘nee’ Smith, 92, passed away on Tuesday, December 3, 2019 at Citizens Memorial Healthcare Facility in Bolivar, MO. Katie was born on Nov 8, 1927 to Walter and Edith Smith. Walter and Edith had eleven children, ten of which lived to be adults. With Katie’s passing, only one sibling remains, Juanita Wisner of Osceola, MO. In 1945, Katie married George “Dick” Harmon, who preceded her in death in 2004. Together they had four children. Jean Ayers (Frank), of Bolivar; Ray Harmon (Cathy), of Labadie, MO; Carol Bender, of Bolivar; and Patricia Thurston, of Springfield, MO. Six grandchildren: Tim Harmon, Tammy Locke, Emily Specker, Michael Bender, and Annie and Kelsey Harmon .She is survived by ten great-grandchildren and numerous cousins, nephews, and nieces. The family moved to Bolivar in 1951, and Katie has lived in the area since. Katie filled her life with her church, reading, and enjoying her extended family. Although many will grieve her passing, it should be remembered that she was loved by many and had a good, productive time on this earth. Friends and relatives are invited to a Visitation with family from 1:00-2:00 PM on Sunday, December 8, 2019 at The Butler Funeral Home in Bolivar. Following the Visitation, a Graveside Funeral will be held for Katie at 2:00 PM in Greenwood Cemetery. In lieu of flowers, the family requests that contributions be made to a charity of your choice. The Family suggests CMH Hospice, which was very supportive of Katie at the end of her life. Other possibilities include associations working to cure Alzheimers, Diabetes, Parkinson’s, or MS.

The family of Katie Catherine Harmon created this Life Tributes page to make it easy to share your memories.

Send flowers to the Harmon family.