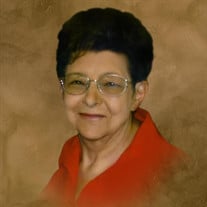 Kathina Louise Lakin, 82 of Humansville, Missouri, passed away on December 2, 2020, at Citizens Memorial Hospital in Bolivar, Missouri. Kathina was born on July 17, 1938, in Molene, Kansas to Cornelius and Maxine Lewis. She was one of five children. Kathina made a living by working in garment factories. She loved spending time with her family and telling stories of her childhood, reading, and shopping. She was a member of Four Square Christian Church in Parsons, Kansas. On April 12, 1958, Kathina married the love of her life, Roy Lee Lakin. They were blessed with one son, Lewis Lee Lakin. They moved from Parsons, Kansas to their farm in Dunnegan, Missouri in 1970, and then to their home in Humansville, Missouri in 1985. Kathina was preceded in death by her husband, Roy, her parents, her grandparents, and a brother, E.W. Lewis. She is survived by her son and daughter-in-law, Lewis and Dianne, and three grandchildren, Cynthia Lakin, Amberly Martino and her husband, James, and Aaron Lakin and his wife, Jennifer. Eight great-grandchildren; Michaela, Garrett, CarLee Rudy, and Addison, Evan, Isaac Martino, and Bryson Erickson, and Canaan Rutledge. She was known as MeMe by kids and grandkids. Kathina is also survived by two brothers and sisters-in-law, Jim and Carol Lewis and Jake and Linda Lewis, one sister and brother-in-law, Karen and Bill O’Neal, one sister-in-law, Gloria Lewis, and a host of nieces and nephews. Friends may sign the guest book 9:00 AM to 7:00 PM Tuesday, December 8, 2020 at the Butler Funeral Home in Humansville, MO. A private family service will held at a later date.

Kathina Louise Lakin, 82 of Humansville, Missouri, passed away on December 2, 2020, at Citizens Memorial Hospital in Bolivar, Missouri. Kathina was born on July 17, 1938, in Molene, Kansas to Cornelius and Maxine Lewis. She was one of five... View Obituary & Service Information

The family of Kathina Louise Lakin created this Life Tributes page to make it easy to share your memories.

Send flowers to the Lakin family.