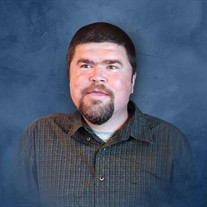 Justin Lee Cleveland, age 43 of Bolivar, MO passed away on Tuesday, August 20, 2019 at Cox South in Springfield, MO. Justin was born on May 30, 1976 to Dennis and June Cleveland in Willows, CA. He graduated from Humansville High School in 1994, and then attended Southwest Baptist University, graduating in 1999 with a minor in business and a Bachelor of Science in psychology. In 2001, Justin met Karen Lynette Stewart, and they were married October 19, 2002. His prognosis of Duchenne Muscular Dystrophy, at a young age, did not stop him from living his life to the fullest. Justin and Karen had two boys, Jaren Lee and Jaydon James, who are not affected by muscular dystrophy. He enjoyed his time spent with family whether at home, on vacation, taking small trips, watching his boys play soccer, or out in his garden working. He worked, self-employed, for his father's business; turning a mom and pop business into an advanced computerized company successfully keeping up with current technology. He did everything from dispatching, bookkeeping, and payroll. Justin attended Wellspring Baptist Fellowship with his family. Everything Justin did he did for God's glory, not his own. Justin is preceded in death by his grandparents, Juanita Holman, James & Audrey Cleveland, uncle, Jerry Holman, aunt, Nita Holman, and brother, Gary James Cleveland. Justin is survived by his wife, Karen Cleveland, sons, Jaren and Jaydon Cleveland, father and mother, Dennis and June Cleveland, and brothers, Josh, John, Robert, Larry and Carsen Cleveland, as well as several nieces and nephews. Isaiah 40:28-31 "Have you not known? Have you not heard? The everlasting God, the Lord, The Creator of the ends of the earth, Neither faints nor is weary. His understanding is unsearchable. He gives power to the weak and to those who have no might He increases strength. Even the youths shall faint and be weary, and the young men shall utterly fall, But those who wait on the Lord shall renew their strength. They shall mount up with wings like eagles, they shall run and not be weary, they shall walk and not faint." Charitable contributions may be made to Polk County Christian School and MDA. Visitation for Justin Cleveland will be held Thursday, August 22, 2019 from 5-7 PM at the Butler Funeral Home in Bolivar, MO. Funeral services will be held Friday, August 23, 2019 at 11 AM at the Wellspring Baptist Fellowship Church in Bolivar, MO. Burial will be held at Greenwood Cemetery.

Justin Lee Cleveland, age 43 of Bolivar, MO passed away on Tuesday, August 20, 2019 at Cox South in Springfield, MO. Justin was born on May 30, 1976 to Dennis and June Cleveland in Willows, CA. He graduated from Humansville High School in... View Obituary & Service Information

The family of Justin Cleveland created this Life Tributes page to make it easy to share your memories.

Send flowers to the Cleveland family.