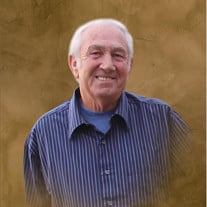 Floyd C. Evans, Jr., affectionately known as "Junior", 75, of Elkland passed away on Saturday, August 15, 2020 at his home. Junior was born in Kansas City, MO on October 25, 1944, the son of Floyd Sr. and Lilian (Bays) Evans. Junior grew up in the Cliquot area and graduated in 1962 from Humansville High School. He served in the U.S. Army from 1963 to 1966, being stationed in Germany. Junior married Peggy Farris in 1968 in Ava, MO. Together they had two daughters. He is survived by his wife, two daughters, Tracy and her husband, Stacy Spears of Arkansas, as well as Tisha and Mike of Buffalo, MO; four grandchildren, Travis Jones and wife, Angel, of Billings, Aundrea Routh and husband, Neil, of Bolivar, Vincent Evans-Jasper of Buffalo, and Lillian Evans-Jasper of Buffalo; five great-grandsons, Blaine and Bryant Routh, Ziiler, Kaine, and Kasen Jones; one sister, Donna Smith and her husband, Don, of Springfield; one sister-in-law, Evelyn Evans of Blue Springs; three nieces; two nephews; five great-nieces; five great-nephews; and one great-great-nephew. Junior was preceded in death by his parents, his step-father, James Dake, his brother, Frank, and one great-nephew, Logan. A Funeral will be held for Junior at 12:00 P.M. on Thursday, August 20, 2020 at Butler Funeral Home in Bolivar. Friends & relatives are invited to a Visitation with the family one hour prior to the service at the Funeral Home. Burial will be held in Salem Cemetery following services. In lieu of flowers, memorial donations in honor of Junior may be made to St. Jude Children's Research Hospital.

The family of Junior Evans created this Life Tributes page to make it easy to share your memories.

Send flowers to the Evans family.