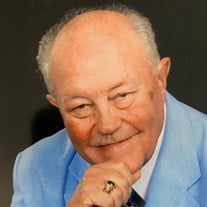 Julian Hughes Pace, Sr., age 83 went to be with his Lord and Savior on January 12, 2022, at Parkview Care Center. Julian was born December 11th, 1938, in Abilene, Texas, to Julian and Ruby Pace. He was preceded in death by his parents Julian Henry Pace and Ruby Hughes Pace and by his brother Ray Henry Pace. He is survived by his wife Elizabeth Anne Mitchell Pace, son and daughter-in-law Julian Hughes Pace, Jr,, and Cynthia Rios Pace; daughter and son-in-law Emily Pace Huff and Timothy R. Huff; grandchildren: Henry Pace Huff, Elliot Mitchell Huff, Amelia Rios Pace, Nicholas Julian Pace, nieces; Keli Cullen, Karen Fetner, and nephew Evans Mitchell. Julian graduated from Waco High School in Waco, Texas in 1957. Julian attended Baylor University in Waco Texas and graduated in 1961. After graduating from Baylor with a BA in history, he entered the master’s degree program at the University of Texas at Austin to obtain his master’s. He transferred to the University of Oklahoma in Norman and completed his master’s in Library Science in 1963. While attending Baylor, he met his future wife of nearly 60 years. Julian and Elizabeth were married on August 25th, 1961, at Elizabeth’s home church, Sunshine Baptist Church, in Springfield, Missouri. After completing his master’s, he accepted a job at Southwest Baptist College as the Director of library services. While at Southwest Baptist, he oversaw the design and construction of the new Estep Library and oversaw the relocation of the entire library into the new facility. In 1972, Julian accepted a position at Southwest Missouri State University as the Administrative Assistant to the Director of Southwest Missouri State University Libraries, and later as Head of Media Services at SMSU. While at SMSU, he oversaw the design, construction and relocation of the library collection to the new Meyer Library. On July 30th, 1998, Julian retired from SMSU, and shortly thereafter became a Member of the Board of Trustees of the Polk County Library and served in that position up to his death. While on the Board of Trustees Julian served as President of the Board of Trustees and also served in the role of Treasurer and Secretary of the Board of Trustees. Locally, he played an active role in planning and fund raising for the Rayl Family Library, located in Bolivar. In 2000, he helped with efforts to build a new Bolivar public library, and relocate the public library collection to the current Rayl Family public library. Julian was the past chairman of the Missouri Association of College and Research Libraries and was a member of the American Library Association, the Missouri Library Association, the Springfield Library Association, the Secretary of State’s Council on Library Development, and the Continuing Education Advisory Committee. As an active member of the American Library Association, Julian would attend annual professional development conferences in major cities across the United States with his family. Elizabeth, Julian, Jr., and Emily treasure memories of traveling together as a family and exploring museums while attending ALA meetings. On July 23rd, 1998, the Missouri House of Representatives adopted House Resolution No. 2017, a special resolution unanimously joining to commend Julian for his outstanding service to the state of Missouri’s higher education students. On September 4th, 2012, the Missouri Senate passed a special resolution congratulating Julian and Elizabeth Pace for their tremendous success in achieving 50 years of wedded bliss and wishing them the best as they continue their journey. Julian was an active member of First Baptist Church of Bolivar since 1963. He was a member of Rotary Club and was a Paul Harris Fellow in Rotary. Following his retirement, Julian traveled frequently, and traveled internationally on separate trips to Russia, Austria, Italy, and England. He was an avid reader and book enthusiast. Julian was a Packard automobile enthusiast and enjoyed owning a 1951 Packard, which he drove in numerous parades in Bolivar over the years.. Julian was a wonderful example of a loving husband, father, grandfather, brother and son, and he treasured his relationships with his entire family including his own parents before their passing. This example has been passed down to his children and grandchildren. Julian’s legacy and spirit will continue to live on in the lives of all those he knew during his life. As a librarian, community volunteer, husband, father, and uncle, he frequently would say and support the statement: “Can I help you?”. In lieu of flowers for the funeral, donations can be made to the “Rayl Family Library Building Campaign” in honor of Julian Hughes Pace, Sr. Julian will be missed by his friends and family. . Services for Julian will be held on Tuesday, January 18, 2022 at the First Baptist Church in Bolivar at 2:00 P.M. A visitation will take place prior to the service at 1:00 P.M. Memorial contributions can be made to: Polk County-Library, Building Campaign, 1690 W. Broadway Street, Bolivar, MO 65613, Attn: Colleen Knight. Please note in the memo section, In recognition of Julian Pace. There will be a live stream during the service for Mr. Julian Pace. You can find the live stream by going to the link below. It will start approximately 10 minutes before the time of service. https://www.facebook.com/Butler-Funeral-Home-343584952377066/

Julian Hughes Pace, Sr., age 83 went to be with his Lord and Savior on January 12, 2022, at Parkview Care Center. Julian was born December 11th, 1938, in Abilene, Texas, to Julian and Ruby Pace. He was preceded in death by his parents Julian... View Obituary & Service Information

The family of Julian Hughes Pace Sr. created this Life Tributes page to make it easy to share your memories.

Send flowers to the Pace family.