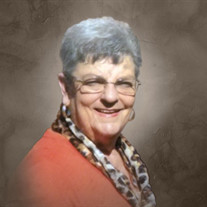 Juanetta Kerene Taylor, 74, of Fair Play, MO passed away Wednesday, November 27, 2019 at Citizens Memorial Care Facility in Bolivar, MO. Juanetta was born on March 8, 1945 to Byron and Fern Davis Taylor in Aldrich, Missouri. In 1961, she married Charles Combs. To this union three sons were born. From an early age, Juanetta showed great promise as a cook. Juanetta loved to put her skills to use for her family and in business, and shared her talents with the Bolivar area by opening Grandma Taylor’s Restaurant. People came from all around to taste her pie and her cobbler. Juanetta found the most enjoyment living simply. She loved others dearly, and showed that love through her work in the kitchen. She will be dearly missed by those who were blessed to know her. Juanetta is preceded in death by her parents, Byron and Fern Taylor, as well as her son, Kent Combs. She is also preceded by her sister, Juanteece Cossins and husband Charles as well as her nephew, Kelly. Juanetta is survived by her sons: Kevin Combs and wife Marcy of Bolivar, and Kim Combs and wife Paula of Bolivar. She is also survived by her siblings: Juanita Griffin and husband Terry of Fair Play, Davis Taylor and wife Jean of the Lake of the Ozarks, Reggie Taylor and wife Sue of Bolivar, JuanaVae Hopkins and husband Mike of Dunnegan, and Lindsay Taylor and wife Diana of Fair Play, MO, as well as ten grandchildren, numerous great-grandchildren, a host of nieces and nephews, and Davie and Sherry Davis of Humansville that she loved as well as her own. Visitation for Juanetta Taylor will be held Tuesday, December 3, 2019 from 10 AM – 11 AM at the Butler Funeral Home in Bolivar, MO. Funeral Services will be held Tuesday, December 3, 2019 at 11 Am at the Butler Funeral Home in Bolivar, MO. Burial will take place at Shady Grove Cemetery. Memorial contributions can be made in Juanetta's honor to the Polk County Humane Society.

The family of Juanetta Kerene Taylor created this Life Tributes page to make it easy to share your memories.

Send flowers to the Taylor family.