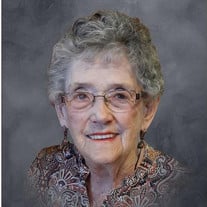 Joyce would like to let you know that her work here is done. She received a call…an offer she couldn’t refuse…an appointment from which she will not be returning. The call came with a reunion of family and friends she has not seen in a long time and included a huge bonus of taking the hand of Jesus and sitting by His side! Joyce Elaine Overholtzer Scott was born on March 5, 1929 in the small town of Tingley in southwestern Iowa to Ellen B (Eckerman) and Wayne A Overholtzer. She departed this earthly life on May 16, 2022. She was preceded in death by her husband, Bernard O’Neal Scott, her parents, her only brother, Dwayne Overholtzer, a son-in-law, Ron Houk, and a granddaughter, Bridgett Dawn Houk. She is survived by seven children—Vickie Sowers and husband, Terry of Bolivar, David Scott and wife, Revonda of Dunnegan, Debbie Jenkins and friend, Angelo Oddo of Kansas City, Steve Scott and wife, Kathy of Bolivar, Beckie Bolin and husband, Tim of Bolivar, Tim Scott and wife, Patsy of Dunnegan, and Lisa Cowden and husband, Danny of Dunnegan; eleven grandchildren---Scott Sowers, Tom Sowers, Courtney Welch, Cassie Scott, Ashlee Roth, Shawna Hartshorn, Sheila Rumfelt, James Houk, Brandon Scott, Stephanie Jenkins, and Samuel Scott; four step-grandchildren—Todd Houk, Kristen Mann, Shanna Lewis, and Michael Bolin; and thirty one great grandchildren. Joyce grew up in Tingley where her father worked as the postmaster and her mother actively involved herself in the various activities of the community and the church. Joyce gave her life to Christ at an early age and was a member of the Tingley Christian Church all during her formative years. Her father also invested in real estate and the family, including her younger brother, Dwayne, took many road trips to visit various relatives and sites all over the United States. Joyce graduated from Tingley High School as valedictorian of her class in 1947. After her graduation from high school, she attended teachers’ college in Cedar Rapids, Iowa over the following summer, earning her teaching certificate. She spent the next school year teaching country school in the area. In the summer of 1948 she married her lifetime love, O’Neal Scott, and moved to Springfield where O’Neal and his father and brother owned a business on Route 66 called “Snow White Lodge.” It was a service station, convenience store, motel court and a local hangout all in one location. In 1954 Joyce and O’Neal and two children moved to a farm north of Bolivar. Five other children followed over the next few years. Joyce lived on that farm until 2019 when she moved to Butterfield Residential Care Center. O’Neal had departed this life on April 28, 2010, so Joyce had the opportunity to celebrate over 60 years of married life. Afterwards she continued to enjoy her own home until circumstances necessitated her move to Butterfield. In 2020, she needed more extensive care and she moved to Parkview Health Care Facility in Bolivar. Joyce worked hard on the farm, raising a large garden, helping run a grade C dairy, and raising her family. In the late 60’s she began working outside the home, first being employed for the local newspaper part time. Later she worked as bookkeeper for Bolivar Lumber Company, which later became Tapjac Home Center and then Meeks Lumber. After their retirement, O’Neal and Joyce took time traveling, especially enjoying many trips to Silver Dollar City. Joyce was an active member of Bolivar First Christian Church where she spent time in various capacities including Christian Women’s Fellowship (CWF) president, member of the building committee, and church elder. Since she was known as a great cook, her contributions to fellowship dinners and church fundraising events were well sought after. In later years she would supervise her daughters and daughters-in-law in the preparation of her dishes and her famous Christmas candy creations. Joyce leaves behind her children, grandchildren and great grandchildren, her cousins, and her many friends and neighbors. She will be missed. The family wishes to thank the staff at Butterfield and Parkview, as well as her home health care workers, and others for their excellent care and dedication. Services for Joyce will be held at 1:00 P.M. on Thursday, May 19, 2022 at the First Christian Church in Bolivar. Visitation will be held on Wednesday from 6:00 P.M. to 8:00 P.M. at the Butler Funeral Home of Bolivar. Memorial donations may be made in Joyce's name to the First Christian Church Memorial Fund.

Joyce would like to let you know that her work here is done. She received a call&#8230;an offer she couldn&#8217;t refuse&#8230;an appointment from which she will not be returning. The call came with a reunion of family and friends she has... View Obituary & Service Information

The family of Joyce Elaine Scott created this Life Tributes page to make it easy to share your memories.

Joyce would like to let you know that her work here is done....

Send flowers to the Scott family.