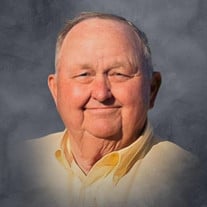 Joe Richard Appleby, 84, passed away surrounded by family on January 21, 2022, at Citizens Memorial Hospital. Richard was born in Los Angeles, California on January 8, 1938, to Joseph Lee and Ella Mae Looney) Appleby. As a young boy he lived and grew up on a farm in Huron, MO. He was saved as a 12-year-old boy and enjoyed attending services at Pleasant View Missionary Baptist Church. He attended a little country school named Greenleaf in Huron, MO where he met his lifelong best friend, Wayne Vest. He graduated from Bolivar High School in 1956. He and his high school sweetheart, Shirley Brooks were married on October 12, 1955, in Bolivar, MO. After they were married, they moved to Louisiana then to Kansas City. In 1970, Richard and Shirley moved their family back to Bolivar. He worked as a carpenter in Springfield, MO for Bramer Construction with his dad for several years. After he retired from Bramer, he became a self-employed Carpenter, farmer, and rental property owner. He built a home for each of his five children. Richard had many hobbies that always included Shirley. They enjoyed boating and fishing and camping at Pomme de Terre Lake. Richard always loved a good fish-fry. Throughout the years, he took many of his grandchildren hunting which always resulted in memories and stories that have been retold throughout the years. Richard was an avid Cardinals fan and enjoyed going to games in St. Louis and Springfield. He also rooted for the Kansas City Chiefs each Sunday during football season. Richard loved taking Shirley to the shows in Branson and to the horse races. The two of them were a gambling pair at the river boat casinos to “win some big money,” always competing against the other and celebrating when they hit the jackpot. A good day in Richard’s life involved being with Shirley, farming, fishing, and visiting with his children and grandchildren. Richard was always an engaging storyteller. He’d command the attention in the room and often had a crowd gathered around to hear his stories that were always funny, but also often revealed some crazy details from his lively past. Richard enjoyed spending time at Bill’s Feed Store with his friends, but what he loved most of all was any opportunity to get together with his family. Richard was at all family birthday parties, celebrations, and holiday parties, always stealing the best gift during the White Elephant Gift Exchange. He enjoyed rooting for his children and grandchildren at their different school and sporting events and took such pride in all of them. He was the best “Pappaw” to his family and will be sorely missed. He was preceded in death by his parents, Joe and Ella Mae Appleby, brother Jesse (Pete) Appleby, sister Karen Cowden and grandson, Justin Fulbright. Richard is survived by the love of his life, Shirley, his brother Randy Appleby and wife Marcia. His children Jolene Fulbright and husband Gary, Joe Appleby and wife Sandy, Jim Appleby, Janelle Payne and husband Mark, and Jennifer Follis; his grandchildren Sarah Stevens and husband Scotty, Mariah Samek and husband Eli, Kristy and Kyle Appleby, Natalie Payne, Brayden Payne and wife Brittanie, Sherry and Kurt Appleby, Jacey, Jackson, and Jed Follis; great-grandchildren Lillian and Fisher Stevens, Brooks and Anderson Samek, Brody and Baker Payne, Arianna, Alixandria, and Donovan Chaudry, and Morgan and Carter Jech; nephews and niece Jeff, Kevin, Jerry, Greg and Jamie and Sam . Funeral services for Richard will be held on Tuesday, January 25, 2022, at 11:00 AM at Butler Funeral Home in Bolivar. A visitation will commence one hour prior to service from 10:00 AM to 11:00 AM. Interment will follow at Mt. View Cemetery in Polk, Missouri. In lieu of flowers, donations may be made to St. Jude Children's Research Hospital in memory of his grandson, Justin Fulbright.

The family of Joseph Richard Appleby created this Life Tributes page to make it easy to share your memories.

Joe Richard Appleby, 84, passed away surrounded by family on...

Send flowers to the Appleby family.