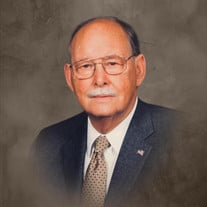 John Robert Smith, 76, of Bolivar, MO passed away Sunday, February 21, 2021 peacefully at his residence. John was born on October 11, 1944 in Unionville, Missouri, the son of Robert H. "Bob" Smith and Irene (Williamson) Smith. On John's 4th birthday the family moved to Bolivar because of his father’s job with the newly formed Missouri Conservation Department. John graduated from Bolivar High School, Class of 1962, and attended Southwest Baptist College. While in school he was active in sports, glee club, mixed chorus and school plays. He started attending First Christian Church with his family in 1948 and was an active member during his life. John taught Sunday school, served as narrator of the Christmas Cantata and was Elder Emeritus at the time of his death. In his youth he was active in the church sponsored Boy Scout Troop 128. Inspired by his father’s leadership as a Scoutmaster, John became an Eagle Scout in the class of 1959. In the summer of 1967 he joined the United States Navy. After Boot Camp he was sent to Naval Hospital Corps School and later sent to Field Medical Service School where he trained to be a Field Medic with the United States Marine Corps. John spent six years on active duty and was discharged in 1973. Following his military service, John began a career in the automobile industry where he was a salesman for 25 years. In 1999 he joined the staff of Butler Funeral Home, where he had worked during his college years prior to joining the Navy. John retired from the funeral home in October 2019. Vacation often found John riding his Gold Wing motorcycle to Cody, Wyoming. He was a student of firearms and their history. He was preceded in death by his parents. John was devoted to his parents, especially in their senior years. Surviving John is his brother Phillip L. Smith (Martha) of Hannibal, MO; children Michael Davolt (Denise) of Nashville, TN; Michelle Thornhill (Bret) of Bella Vista, AR; Grady Davolt of Columbia, MO. Niece Lora M. Smith of McKinney, TX; nephew Gregory L. Smith of New York, NY. Grandchildren, Zoey, Zaley and Ty Davolt of Nashville, TN; Maddie, Mollie and Collin Thornhill of Bella Vista, AR; Colby and Parker Davolt of Columbia, MO. Services will be held 10:30 a.m. Friday, February 26th at the First Christian Church in Bolivar, MO with Pastor Bill Nichols officiating. Burial will take place in the Greenwood Cemetery following services on Friday. The family asks that those in attendance wear masks and practice social distancing. Due to COVID there will be no public visitation. John had many friends in the Bolivar area and they are invited to pay their respects and sign the register book at anytime. Pallbearers will be Michael Davolt, Ty Davolt, Gregory L. Smith, Bret Thornhill, Collin Thornhill, Gary Short, Rick Lindsay, and Michael Fraser. Memorials are suggested to the First Christian Church of Bolivar, MO.

The family of John Robert Smith created this Life Tributes page to make it easy to share your memories.

Send flowers to the Smith family.