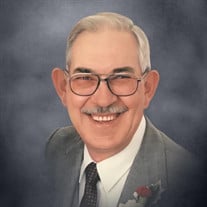 John Benjamin Matchell, a resident of Bolivar Missouri went to his heavenly home on the afternoon of April 19th, 2022. He was the son of John B. Matchell and Lizzie Rumpel Matchell. Born September 4th, 1932, in the Huzzah Missouri area, he lived to be 89 years old. His last few days were spent under doctor’s care at Citizens Memorial Hospital, in Bolivar. United in marriage, on October 26, 1951, to the love of his life, Marie Ross Matchell their marriage lasted 66 years. John and Marie served as youth directors of New Harmony General Baptist Church in St. Louis from 1958-1967. Most recently he was a member of First Baptist Church of Bolivar, Missouri where he served as a deacon. He is survived by two sons, John Jr. and his wife, Brenda of Annapolis, Mo, and Steve and his wife, Connie of Siloam Springs, AR and daughter in law, Sue Matchell of Bolivar, MO. He was a loving and devoted grandfather to Amy, Brad, Brian, Corrie, Phillip, and Anna. He also leaves behind 11 beautiful great grandchildren, one great-great grandchild, many nieces, nephews, relatives and special friends. Preceding him in death were his father John B. Matchell , mother Lizzie Rumpel Matchell, wife Marie Matchell, son Phil Matchell, and two brothers, Raymond Matchell and Joseph Matchell. John worked as a welder and supervisor at Progressive Fabricators in St. Louis Missouri before changing careers and working for many years with the Missouri Department of Conservation. After retirement, John and Marie served for 13 years as volunteers in the American Red Cross and volunteered at Citizens Memorial Hospital. They served in disaster relief for several local and national disasters including 9-11. He was also a long-time active member of The Gideons International. John was a lifelong avid hunter, fisherman and St. Louis Cardinals fan. Many of these passions he passed on to his children and grandchildren. Unknown to many, John was also a talented woodworker, creating several turkey calls and beautiful furniture pieces, including a cradle that was used to rock all his grandchildren and many of his great grandchildren. He also supported Marie by tending to the many gardening projects she created. John was known to always carry a small shovel in the car so that he could stop on the side of the road and dig up any flower Marie saw and wanted for her flower garden. Services for John will be held 11:00 AM Saturday, April 23, 2022 at the First Baptist Church in Bolivar. Visitation will be held one hour prior to services from 10:00 AM to 11:00 AM. at the First Baptist Church. Burial will take place in Greenwood Cemetery.

John Benjamin Matchell, a resident of Bolivar Missouri went to his heavenly home on the afternoon of April 19th, 2022. He was the son of John B. Matchell and Lizzie Rumpel Matchell. Born September 4th, 1932, in the Huzzah Missouri area, he... View Obituary & Service Information

The family of John Benjamin Matchell created this Life Tributes page to make it easy to share your memories.

John Benjamin Matchell, a resident of Bolivar Missouri went to...

Send flowers to the Matchell family.