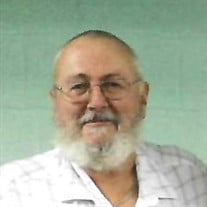 John Jesse Henry, left this life on July 30, 2021 in Springfield, MO. He was born June 11, 1948 to James Lloyd and Jessalee Marchetta Henry in Clinton, MO. John's hobbies included wood carving, reading, fly fishing, cooking and he loved Cajun cooking and eating. He will be well remembered for his favorite hobby of telling jokes and stories to his friends, co-workers and waitresses. John always said he would rather laugh than cry. John has worn many hats in his life. He was a manager of several businesses in Baxter Springs, KS and Joplin, MO. He was a gunsmith, mechanic at a Ford dealership in Bolivar, MO. John was also a welder, truck driver and Mayor of Humansville, MO. He was the owner of an accounting and tax service, and retired as a Sargent from the Bolivar Police Department. John was an elder at Collins Christian Church, Collins, MO He was an ordained minister of the Gospel, Filing in at various Churches when called upon. For many years John conducted Church at Northwood Hills care Center Humansville, MO, Where he was loved by all the residents and staff. Kind and giving, he would always help someone in need. John was preceded in death by his parents, his late wives, Velma Ann Pendergrass and Joyce Jaunita Davolt Henry. Left behind are his brother, James Lee Henry of Stockton; four daughters, Peggy Pyle-Burgess and her husband Jeff of Highlandville, MO , Becky Blakeslee of San Diego, CA, Jennifer Hartley of Humansville, MO and Melissa Roberts and her husband Paxton of Springfield, MO; 26 grandchildren and 18 great grandchildren and several nieces and nephews and a host of other relatives and friends. A memorial service for Jack will be held at the Collins Christian Church in Collins, Missouri at 1 P.M. Saturday, August 7, 2021.

The family of John Jesse Henry created this Life Tributes page to make it easy to share your memories.

Send flowers to the Henry family.